DARK NIGHT OF THE SCARECROW 2: Better Late Than Never? 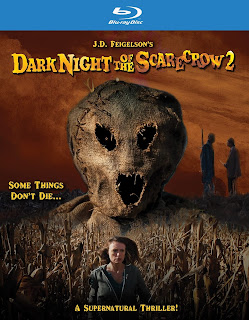 For those unaware - like yours truly - Dark Night of the Scarecrow was a made-for-TV horror film that premiered on CBS in 1981. It had a fairly impressive cast as these things go, including Charles Durning, Larry Drake, Jocelyn Brando and Lane Smith. Though I've yet to see it - nor do I feel particularly compelled to - the film apparently developed something of a cult following over the years.

Four decades later, we’re getting a sequel (better late than never, I guess). The cast features no one you’ve likely heard of, but the original’s creator (J.D. Feigelson) is back, this time multitasking as director, writer and producer. Not quite a stand-alone story, he at-least makes certain Dark Night of the Scarecrow 2 still works on its own, only briefly alluding to the original film to explain how and why the titular creature exists.

In this one, the scarecrow begins killing a variety of unsavory types, mostly those who pose a threat to Chris Rhymer (Amber Wedding) and her sullen son, Jeremy (Aiden Shurr), who’ve moved to a small town under the witness protection program to avoid the wrath of a mob boss. This means, of course, that the scarecrow is the hero of the film…and oddly endearing. In fact, whenever he puts on his ‘angry eyes,’ he’s actually kinda cute.

That’s probably not what horror lovers want to hear, but despite a lack of any real scares, the film isn’t without interest. While the performances are nothing to write home about, the story ain’t bad and it moves along briskly, featuring a couple of creatively shot - though fairly bloodless - death scenes. Considering the obviously limited budget, Dark Night of the Scarecrow 2 is pretty well assembled and, with a brief running time, doesn’t wear out its welcome. However, I suspect some fans of the first film might feel this (very) belated sequel was hardly worth the effort after so many years.

TRAILERS - For various VCI horror titles, including this one and the original (which actually sums up the film quite nicely, a plus for newbies).