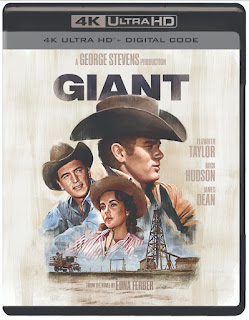 😺GIANT arrives on 4K Ultra HD 6/21 from Warner Bros.
Giant, the 1956 classic film starring Elizabeth Taylor, Rock Hudson, and James Dean in his final role, will be released on Ultra HD Blu-ray and Digital on June 21. George Stevens, Sr. won his second Oscar for directing the sweeping family saga set in Texas during the days of the oil boom. Based on Edna Ferber’s controversial novel, the movie's release in 1956 was a massive box office hit and garnered 10 Academy Award nominations. Considered by critics as ahead of its time, Giant is admired today for the breadth of its humanity more than its epic scale with its grand themes of generational conflict, racial tolerance, and social change. It exposed the marginalization and segregation of Mexican Americans for the first time on the big screen. At the center of the film, Elizabeth Taylor, as Leslie Benedict, portrays a strong and progressive woman who acts to stem the patterns of injustice. In 2005, the film was selected for preservation in the United States National Film Registry by the Library of Congress as being "culturally, historically, or aesthetically significant." 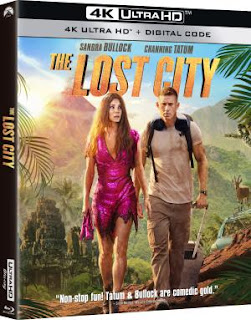 😺THE LOST CITY on Digital 5/10 and 4K/Blu-ray 7/26 from Paramount.
Discover thrilling adventure, fabled treasure, and epic laughs when the hit comedy THE LOST CITY finds its way home for purchase on Digital starting May 10, 2022.  The film will arrive on 4K Ultra HD, Blu-ray, and DVD July 26 from Paramount Home Entertainment. Starring Sandra Bullock, Channing Tatum, Daniel Radcliffe, and Da’Vine Joy Randolph, this “fun & wild jungle adventure comedy” (Erik Davis, Fandango) is “a hilarious adventure from start to finish” (Dorian Parks, Geeks of Color).  Fans can enjoy THE LOST CITY at home on Digital*, 4K Ultra HD, or Blu-ray and get over 50 minutes of fun-filled bonus content, including hilarious bloopers, deleted scenes not seen in theaters, and multiple behind-the-scenes featurettes.  Take a trip to the movie’s exotic filming location, see how the incredible action set pieces were filmed, discover the story behind the infamous jumpsuit, and much more! 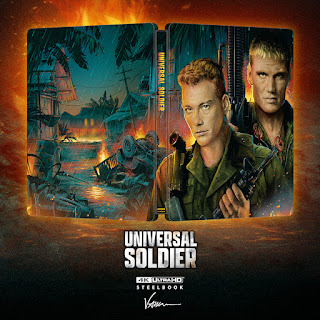 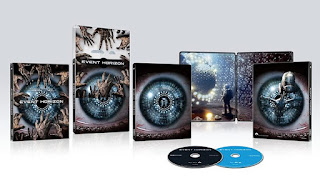 🙀EVENT HORIZON 25th Anniversary 4K Blu-ray SteelBook Coming 8/9 from Paramount.
Seven years ago, pioneering research spacecraft "Event Horizon" mysteriously vanished without a trace on its maiden voyage. But then, in the darkness of deep space, a persistent signal prompts a rescue crew to wing its way through the galaxy on a bold rescue mission. What they uncover is an unimaginable interstellar horror that will test the entire team's sanity and souls. This set includes a new 4K restoration of the film, as well as numerous bonus features: Audio commentary by director Paul W.S. Anderson and producer Jeremy Bolt; The Making of Event Horizon - Five featuurettes; The Point of No Return - The filming of Event Horizon with director commentary; Secrets with optional director commentary; The Unseen Event Horizon - the unfilmed rescue scene, plus conceptual art; Original trailer.
Posted by D.M. Anderson at 8:44 AM