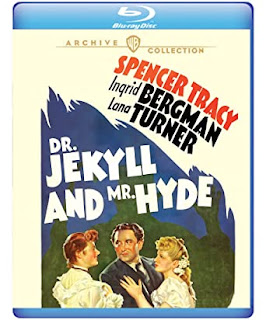 Of the umpteen adaptations of Robert Louis Stevenson’s Dr. Jekyll and Mr. Hyde, the 1931 version starring Fredric March remains definitive (and arguably the scariest). However, this one - which followed a decade later - isn’t without interest, though some of its entertainment value does come at its own expense.

I remember reading somewhere that Spencer Tracy wasn’t particularly happy with his turn as the titular character(s). The role was certainly atypical of those he usually played, which showcased his effortless, naturalistic style. Though one can convincingly argue Tracy is indeed miscast, he’s still the main reason the film is worth seeing. Dr. Jekyll and Mr. Hyde provides the rare opportunity to see Tracy chew up the scenery, a performance which at-times approaches campiness. Without question, he goes all-in here, especially after transforming into the monstrous Mr. Hyde (aided by impressive make-up for the time).

In some ways, Tracy’s performance can be compared to Jack Nicholson’s in The Shining…bold, manic and undeniably entertaining, yet so overwhelming that it overshadows every other aspect of the film. And like Nicholson, Tracy’s Jekyll sometimes appears on the verge of losing his shit even before Mr. Hyde rears his ugly head. Fun to watch? Absolutely, but we feel more jazzed by the performance than unnerved by the character’s transformation.

Elsewhere, Lana Turner (as fiance Bea Emery) is required to do little but look pretty, though Ingrid Bergman nicely plays against-type as Ivy Pearson, the morally-questionable object of Jekyll’s suppressed lust and Hyde’s abuse. The film is seldom suspenseful and sometimes chuckleworthy, but the tone is occasionally enhanced by impressive production design and an evocative score by Franz Waxman. Still, this version of Dr. Jekyll and My. Hyde is mostly the Spencer Tracy show, which isn’t necessarily a bad thing. It’s not often you get to see a guy like him crank things up to 11.