LIBERTY VALANCE Gets Shot in 4K 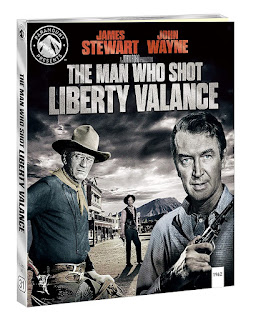 Including The Man Who Shot Liberty Valance in the ongoing Paramount Presents series (#31, for those keeping count) is a no-brainer. Not only a big hit, it’s arguably the last great film directed by the legendary John Ford and pairs two Hollywood legends for the first time.

This release is also noteworthy for being the first Paramount Presents 4K UHD offering (along with a Blu-ray version). As such, the film looks and sounds good, though to be honest, I didn’t notice a huge difference between the Blu-ray and 4K discs. The overall image of the Blu-ray might even be more consistent. Still, both are an improvement over previous releases.

As for the film itself, I’m gonna commit potential blasphemy by saying The Man Who Shot Liberty Valance has always been a bit overpraised. That’s not to say the film isn’t terrific entertainment. Anchored by one of the more compelling stories Ford has ever worked with, it’s loaded with great moments, from Lee Marvin’s ferocious performance as the hateful sadistic titular villain to the complex vulnerability Stewart instills in Ransom Stoddard, subjected to the brunt of Valance’s reign of terror until their classic stand-off.

Somewhat deliberately paced, Ford methodically builds tension through the first two acts, raising the stakes with each conflict between Valance and Stoddard. However, sometimes the movie gets a little pokey, particularly when veering off to focus on secondary characters, some of which are too broadly rendered to invest in. That includes John Wayne as Tom Doniphon, who’s almost too stoic to be believable, even while trying to woo love-interest Hallie (Vera Miles). And let’s face it, as actors go, Wayne was never in the same class as Stewart, which is glaringly obvious when they share the screen.

Finally, the story goes on way longer than it needs to. Without providing spoilers, the primary conflict is resolved a full 20 minutes before the credits roll, then ties-up loose ends with a meandering coda. Granted, it’s to set-up a major plot revelation, but that could’ve been accomplished more concisely. In fact, a single shot recounting what really happened during the climactic gunfight might have had more dramatic impact, as opposed to Tom taking Ransom - and the viewer - aside to explain it all.

But that’s just me. For the most part, The Man Who Shot Liberty Valance remains an entertaining late-career milestone for both Stewart and Wayne, while Ford reminds us he didn’t need color, big sets or the “wide open spaces” to put together a dark, compelling western (for budgetary reasons, it was filmed entirely on soundstages). This 2-disc set also includes more extensive bonus features than the usual Paramount Presents release, as well as outstanding packaging.

“THE SIZE OF LEGENDS: THE SOUL OF MYTH” - An excellent multi-chapter documentary.