THE BEATLES AND INDIA: A Familiar Pilgrimage 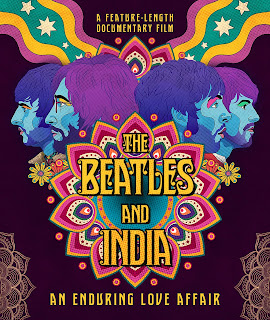 Keep in-mind that The Beatles and India does not include the active participation of Paul McCartney, Ringo Starr or anyone else who had close ties to the band (though archival interviews of all four serve as partial narration). And except for Pattie Boyd, there are no insights from anyone who joined them during their storied pilgrimage to India. And even though most are well-aware of the Eastern influence on The Beatles’ music - George Harrison’s in particular - the producers of this film obviously had no clearance to use it. But that’s okay…we know the songs by heart, anyway.

Additionally, their time in India has already been well documented in plenty of other books and documentaries (the best being the boys’ personal recollections in The Beatles Anthology). Since this one features a lot of the same vintage photos and footage we’ve seen over the years, their experience with Maharishi Mahesh Yogi is the least interesting aspect of the film.

But not only did The Beatles begin to embrace India’s music and culture as early as 1965 - when George Harrison became obsessed with the sitar - the country reciprocated by taking the band into their own hearts (a rarity for Western artists). These scenes - with plenty of on-screen interviews by various Indian musicians, friends and professionals who did interact with them - are quite fascinating. Rarely have we seen or heard the details of this congenial relationship from India’s perspective.

Of course, no documentary like this would be complete without including legendary sitarist Ravi Shankar, shown teaching Harrison how to master the notoriously difficult instrument. It’s also a friendship which lasted years beyond The Beatles’ break-up. But again, this is also familiar territory.

The Beatles and India works best when focusing on the lesser-known details…such as personal anecdotes from Indians who became acquainted with George, or more amusingly, an entitled British fan who recalls sneaking into a hotel where George was staying, only to be harshly rebuffed. In fact, the best parts of the film involve George, but since he was the one most-enamored by all things India, I guess that’s to be expected.

ASHRAM MAP - A map and restoration footage of the retreat where The Beatles stayed in India.