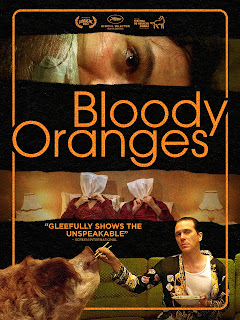 Well into Bloody Oranges, there’s a prolonged, gruesome scene that I’m ashamed to admit I really enjoyed. A young woman, Louise (Lilith Grasmug) is abucted, tossed into a van and later raped. In the aftermath, she manages to escape her bonds while her attacker (Fred Blin) is sleeping. But instead of making a hasty exit, she bashes him in the face with a crepe pan and ties him to a chair. After selecting the right tool for the job, she castrates him, microwaves his balls and spoon-feeds them to him.

What makes the sequence more rousing than repulsive is that we’re spared seeing Louise’s assault, yet witness the man’s mutilation in giddy, gory detail. She takes great pleasure in drawing out his torment, and so might some sick bastards in the audience (such as yours truly). But hey, the guy had it coming.

Comeuppance appears to be one of the themes of the film, a series of concurrent storylines loosely connected by a character or two. But Bloody Oranges isn't a traditional revenge picture. The aforementioned ball-baking scene is just the middle act of Louise’s story; the climax is her trial, where she faces assault charges for torturing her rapist.

Another story involves a corrupt French financial minister (Christophe Paou), whose nasty retribution appears to be symbolic of what writer-director Jean-Christophe Meurisse sees his government doing to its own people. Such commentary might also explain the third storyline, in which an elderly couple tries to win a dance contest to keep the bank from repossessing their house.

Now that I think about it, Louise’s trial prep with her lawyer, Alexandre (Alexandre Steiger), might more of a statement than the violence she endures (and inflicts). She’s ready to own what she did - and the fact she took pleasure in it - while Alexandra insists she maintains being a victim by testifying that she didn’t know what she was doing. An indictment of how the current system puts rape victims on trial? Perhaps, but I wouldn’t presume to know what Meurisse is trying to say, if anything. Maybe he’s just trying to shock people.

What I do know is that the first half of Bloody Oranges is so deceptively mundane that one might be tempted to give up on it. Some scenes don’t appear to serve any discernible purpose, such as the copious amounts of sexually frank dialogue or the dance judges’ histrionic debates over who deserves to win the dance contest. But with almost no foreshadowing, the film turns on-a-dime, descending into depravity that’s frequently tough to watch (even if we’re sometimes silently cheering). Some of these characters’ fates are morbidly amusing, others are distressingly poignant. And with hindsight, we realize many of those seemingly meandering early scenes were necessary to lay the groundwork.

As a black comedy - which it’s obviously intended to be - Bloody Oranges is occasionally successful. But overall, its visceral cruelty - even to characters who might deserve it - tends to smother most attempts at humor. Still, if one can power through the first half - reflecting on its importance afterwards - the film isn’t without vicarious rewards.