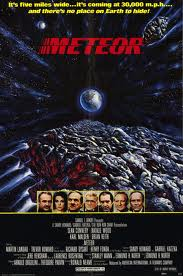 This was one of the last (and worst) disaster movies of the 1970s. It was also one of the first (and worst) disaster movies to depict a nasty space rock threatening to obliterate the human race. Actually, I take that last statement back. Armageddon is worse, because at least Meteor doesn't subject us to Ben Affleck and Liv Tyler engaging in foreplay with animal crackers. Yuck.

Meteor was also one of the few big budget attempts by American-International Pictures (purveyors of cheap drive-in fodder since the 50s) to compete with bigger studios. It featured a huge cast which, considering the shitty special effects and plethora of stock footage, must have taken a majority of the budget. But hey, they managed to nab Sean Connery, who had to be laughing his ass off when they handed him his check.

But as bad as Meteor is, it did have one great thing going for it at the time. It inspired an absolutely bitchin’ pinball machine.

This was 1979, when there were still arcades in every mall, theater and pizza parlor. Sure, some lucky kids had an Atari 2600 at home, but that was a poor substitute for arcade games designed to devour your quarters like an aardvark sucking up ants. Back then, arcade games still had the best graphics, and although Pac-Man, Asteroids and Space Invaders were what most kids played, there was still room in those dark palaces for a few good old fashioned pinball machines.

Pinball was becoming somewhat archaic at the time, yet not totally extinct. I’ve always liked pinball, and if you’ve ever played it for any discernible length of time, you know it actually requires a shitload of skill. I hate beginning any statement with ‘back in the day,’ but back in the day, in arcade games, your quarter gave you three chances to get the highest score possible. Three. There was no continuing the game by plugging in more change, no do-over of the level you just failed, no online cheats to help you out. Once you used-up your three chances, that was it. Game over.

If you had skill, you could play forever with a single quarter. If not, you spent most of your weekly allowance trying to get skilled. To put it in terms modern kids would understand, if Portal was an arcade game, each level would likely cost you a half-year’s allowance to master.

Pinball is even harder because, unlike Pac-Man, each machine is different and mastering the flippers is a lot like shooting pool...it’s not a matter of simply hitting the ball. Getting it to go where you want takes a lot of finesse, not-to-mention a working knowledge of gravity. If you’re really good, just maybe you can achieve a score high enough to earn a free game. But no matter how skilled you are, sometimes you lose your ball anyway. Why? Because shit just happens. And taking your anger out on the machine will just cause it to shut down, kind of like when my wife and I fight. Perhaps this makes pinball a nice little microcosm of life.

Its unforgiving difficulty is probably why pinball is seldom the game of choice for gamers used to having infinite chances to overcome what stands in their way. Still, there’s a token machine or two standing in the corners of the few video arcades left, blinking and chiming, inviting you to part with the change in your pocket.

So why are they still around? That’s easy...they are enticing, flashy and often talk to you as you walk past. But most importantly, even though the game is essentially the same, pinball machines have individual personalities, not simply something programmed for a video screen. And when you kick-ass at a pinball game, you really do feel like the master of the arcade. But unlike modern console games with an actual story and final outcome, you don’t ever ‘beat’ a pinball machine; no matter your final score, it is always possible to achieve a higher one.

Anyway, back to ‘79, when pinball was an endangered species...it was around this time game designers started coming up with new and exciting ways to separate kids from their cash, like multi-ball and digital readouts similar to the calculators we were just starting to carry in our backpacks to school. 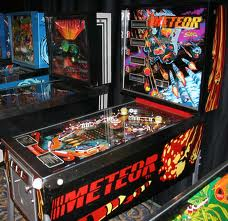 Meteor was the first arcade game I ever saw that was inspired by a movie. Today, console games based on blockbuster movies are practically the norm. In fact, of the 50 highest grossing movies/franchises of all time, only seven have yet to inspire any kind of electronically-based game.* And just as most movies based on video games are pretty shitty, the same usually applies vise versa. Most movie-based games are cynically thrown together to capitalize on an brand name.

But the Meteor pinball machine was different, and not just because movie-based gaming was rare at the time. The machine was flashy, fast and loud. It was also one of the earliest to employ multi-ball (a feature where you could unleash three balls at-once by hitting the right targets, thus racking up a shitload of points). Unlike pinball games of old, this one was semi-computerized, and the fury of light & sound always made you feel more skilled than you actually were. Most importantly, the game was a hell of a lot better than the movie which inspired it.

Me and a few friends first played the machine in the lobby of the Southgate theater, where we had just bought our tickets to see same the film it was based on. We still had about 20 minutes to kill, so we started plugging quarters into this sexy machine. The damn thing was so addicting that Meteor (the movie) had already been playing for a half hour before any of us checked the time. Since our pockets were still loaded with change, we mutually agreed to play pinball for another hour while waiting for Meteor’s next showing.

Ironically, the movie came and went within a few weeks - it really is one of the worst disaster movies ever made - but the Meteor pinball machine stuck around in the Southgate’s lobby for over a year, and I plugged a few quarters into it every time I visited the theater. I don’t know how much American-International Pictures actually made from licensing the title out to Stern Electronics (the company to created the machine), but I know they ended up with a shitload of my allowance.

* Titanic, The Hunger Games, The Passion of the Christ (and who the hell would want to play it?), Forrest Gump, The Sixth Sense, Inception and the films in the Twilight Saga
Posted by D.M. Anderson at 5:29 PM