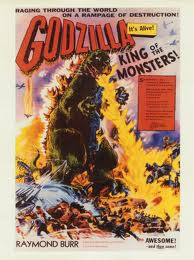 GODZILLA: KING OF THE MONSTERS

A few words about a concept known as “Francie Science.”

Named after my dear wife, Francie Science is a cause-and-effect study which does not actually require any scientific knowledge. If it sounds good in your head, and you can effectively articulate your theory to others, then it must be true. Case in point: Earlier this year we were having problems with a clogged bathtub drain. No matter what kind of industrial shit we used to try and open it up, the tub would literally take hours to drain.


I like to brush my teeth while showering in the morning (it's as close as I ever come to multitasking), but my wife applied a little Francie Science, coming to the conclusion that my toothpaste spit was congealing in the pipes, using body hair to form an impenetrable bond that was impervious to water. Hence, the clogged drain was my fault (someone let me know if this theory is actually true, because we have a leak in our roof, and a tube of Crest is a hell of a lot cheaper than buying some sealant at Home Depot).

I say all this because, without Francie Science, there wouldn’t be any movies like Godzilla - King of the Monsters, or any other monster flick from the 50s. This time the culprit is radiation, which mutates a lizard into a 300 foot behemoth, hell-bent on sinking ships and knocking down buildings. If radiation truly does make everything bigger and more destructive, I wonder why no one’s ever thought of using it as a male enhancement product.


Godzilla is arguably the most famous monster-on-the-rampage movie after King Kong, and an Americanized version of the original Japanese film, Gojira, which was a thinly disguised allegory for the atomic attacks on Hiroshima and Nagasaki. But Americans understandably don’t want to be reminded of that, so we get lots of added footage of Raymond Burr as Steve Martin, a wild and crazy reporter who happens to be in Japan at the time of the attacks. Of the two versions, I have to say I prefer watching a guy in a lizard suit stomp on models without all that WWII guilt. If want to feel like an asshole for being an American, I can just watch FOX News.

But even without the anti-nuke message, Godzilla is pretty somber for a dumb popcorn movie. It is still rather chuckle-worthy because of the atrocious dubbing, the hilariously bad attempts at inserting an American actor into an already finished film, and of course, a heapin’ helpin’ of Francie Science. 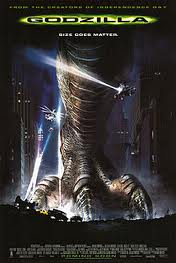 It’s still amazing to me how hated this movie was when it came out. After all, this is a remake of a 1950s Japanese monster movie, not The Seventh Seal. What the hell were people expecting? Of course the movie is big, loud and dumb, much like Independence Day (made by the same guys).

But over-hype probably killed Godzilla; back then, you couldn’t go ten minutes without another having another Godzilla trailer shoved up your ass. Maybe one should fault Columbia’s marketing department instead, because the film certainly delivers what it promises...lots of massive wholesale destruction of famous New York landmarks.

The title monster is the result of nuclear testing by the French (now we have another reason to hate those guys). It ain’t long before this 300-foot lizard is stomping all over the globe looking for food, and fish is his meal of choice, judging by the attack on several trawlers and a cargo ship loaded with cans of tuna.

The military recruits Nick Tatopoulos (Matthew Broderick), who studies the effects of radiation on worms, to head the team tracking down the monster. Meanwhile, Godzilla pops up in the Big Apple, looking for a place to raise a family, and it turns out that he's actually a she (even though everyone still calls Godzilla "a he...a very unusual he") and wants to lay some eggs, deciding the secluded confines of Manhattan Island are ideal for nesting (okay, so he’s stupid). The military responds by doing everything they can to destroy the monster - one intentionally hilarious running gag is that, during each conflict, the military ends up destroying more of Manhattan than Godzilla does.

But unlike the Godzilla of old, this one is quick, and smarter than most of the characters in the movie...he can burrow through the ground like the moles in my yard, swim like a fish, and hide inside buildings to ambush attacking helicopters (and apparently knows where the copters are going to be before they even get there). He also seems to be able to change size at will; one minute he’s 300 feet tall, the next minute he’s burrowing through New York’s subway tunnels. But who really cares about such inconsistencies when we get to see Madison Square Garden explode (I always hated the Knicks, anyway), the Brooklyn Bridge collapse, and the Chrysler building topple to the ground? In addition, ships are destroyed and sunk in loving slow motion, a submarine explodes, and dozens of buildings are devastated with the flick of a lizard’s tail. Godzilla also features an unlikely-but-rousing car chase through Manhattan, where our heroes are in a cab, being chased by the vengeful Godzilla after they destroy his eggs.


Yeah, the movie’s loaded with dumb and illogical characters - Jean Reno, as a mysterious French agent trying to cover up the whole mess, never sees the utter futility of his task - and some glaring plot holes (if you’re in a copter being chased by a 300-foot monster, why not fly up to 400 feet?). But Godzilla isn’t a documentary, for Christ’s sake. It’s the cinematic equivalent of a Domino’s pizza; it’s good going down, and it delivers exactly what you expect, so what more do you want?
Posted by D.M. Anderson at 2:17 PM