TITANIC: The Eternal Battle Rages On... 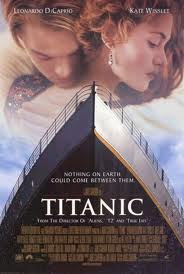 A brief history lesson...one which we are doomed to repeat...

Long before Edward & Bella, there was Jack & Rose, and as a middle school teacher, I had a unique perspective of the cultural phenomenon that was once Titanic.

Back then, it wasn’t Robert Pattinson’s pasty glower or Taylor Lautner’s shiny chest filling the pages of Seventeen and adorning girls’ bedroom walls, but Leonardo DiCaprio’s squishy cherub face. He made all the little girls swoon, who repeatedly migrated in packs to the nearest mallplex as many times as their allowances would allow, just to watch young Jack sacrifice his own life to save Rose all over again. As for Rose...well, she was that generation’s Bella...mostly an afterthought in the eyes of the Titanic faithful...an object of adoration for the guy who was the object of their adoration.

To utter anything negative about DiCaprio or Titanic meant facing the verbal wrath of any zealous young female within earshot. So naturally, every boy in my middle school did that very thing whenever the opportunity arose.

Just as it is with Twilight today, all males under 16 were required by law to openly declare their  utter contempt of all-things-Titanic, especially DiCaprio, even if some of them hadn’t actually seen the movie. It was also customary to, as often as possible, inform the world Leo was gay. The purpose of this was, of course, to mask the bitter envy they felt once they realized DiCaprio possessed three things they never would: ridiculously good looks, millions of dollars and the adoration of every young girl in the free world. Someone like that had to be gay, right?

I watched this dichotomy with detached amusement on a daily basis in my classroom. The girls breathlessly extolled Titanic’s greatness, occasionally lamenting the news DiCaprio already had a girlfriend (as if Leo was waiting for a 13-year-old to sweep him off his feet). Feeling emasculated, the boys would jeer and question Leo’s manhood. Ironically, these same guys had no problem ogling Britney Spears, but I never heard any resentful girls declaring her a lesbian.

In middle school, while the names may change, this eternal battle rages on, most recently over the Twilight movies. Currently, Edward & Bella are the greatest lovers of all time, Pattinson & Lautner are gay.

But unlike Twilight (which really is a bad movie), I still don’t understand exactly why so many boys instantly resented Titanic or Leo. Sure, there’s the sappy love story, but it’s also loaded with violence and scenes of massive destruction where hundreds of people die (what self-respecting adolescent guy doesn’t love that?). Yeah, DiCaprio had the girls swooning, but Kate Winslet was a nice bit of eye candy herself, and she was the one who got naked. Considering that bonus bit of boobage, all that really keeps Titanic from being the perfect adolescent male fantasy is Vin Diesel speeding around the ship's deck in a street racer.

When I first watched Titanic and witnessed the ensuing teen phenomenon, it was with adult eyes, and my wife never started clipping pictures of Leo from fan magazines (she had the hots for Harrison Ford anyway). However, I vaguely recall a time in middle school when Robby Benson was all the rage with the girls in my class, and thinking, what a fag. Of course I resented him. Mr. Benson likely got more tail during his few years of teen-idolness than I would in ten lifetimes.

So I guess I was no different back then than middle school boys are now.