PLANET OF THE APES: Really, Mom? 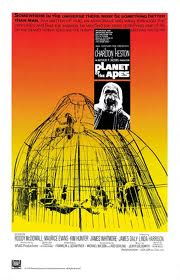 As loving, doting and caring as my mom was when I was growing up, she had an occasional cruel streak which would rear its ugly head. No, she was never abusive or overtly mean. I was never spanked or punished for no reason. Mom has always been the most giving, sensitive & sentimental member of our family. She was, and still is, totally selfless and willing to do damn near anything to assure the happiness of those around her.

I'm sure she doesn't remember (and would likely deny it if she did), but on very rare occasion, 'Evil Mom' would burst out like The Thing erupting from its host. Despite her loving nature, there must have been a tiny, cackling voice inside, telling her to fuck with her son's head for the sake of a good laugh.

For example, one of my earliest childhood memories was sitting in a grocery cart while Mom did her shopping. Suddenly, out of the blue, she walked away from the cart, waved and said "Goodbye, honey" before disappearing into the next aisle for a minute or two, leaving me alone to panic and cry.
Then there was the time I was in my bedroom playing with Legos. I spent the better part of an hour constructing a detailed skyscraper that must have measured two feet high when completed. Proud of my hard work, I gingerly picked it up and went to the living room to show her the fruits of my labor. Mom took it in her hands, examined it for a few seconds, then let it drop to the floor, where it shattered back into tiny bricks. "Oops!" she said with a giggle.

Don't get me wrong...Mom wasn't intending to be mean or anything. She just thought what she did was funny. As a parent myself, I can sort-of relate. I love my kids, as most well-adjusted parents do. But every now and then, messing with their heads is sort-of a guilty pleasure. And as long as you don't go too far, most kids recover nicely.

But my mom did go too far once, when she thought it would be amusing to totally ruin Planet of the Apes for me.

This classic premiered on CBS one Friday night in ‘73, and I'd been looking forward to it all week. I'd heard of the movie, but other than the intriguing title, knew nothing about it. Thankful for my extended bedtime on weekends, I sat down to watch this three hour epic (padded by commercials, obviously).

The film is about three astronauts led by Charlton Heston, who travel 2,000 years into the future and crash land on a planet where apes are the dominant species and humans are the animalistic primates. The movie is violent, exciting and a lot of fun, especially to a ten-year-old kid. I was transfixed, and stayed glued to the living room sofa, even during the commercial breaks.

I didn't know what my parents were doing all this time, since I was the only one in the room, but with less than a half-hour to go, Mom popped her head in to check on me. It was during a particularly tense moment of the movie, and I barely noticed she was there...at least until she said the worst thing a parent could possibly say to her son...

"By the way," she said with a mischievous grin. "the planet they crashed on is really Earth."

I’m pretty sure my jaw dropped at the time. I’ve been sitting here watching this for two-and-a-half hours, then you bounce in and give away the ending? Why would you do that?

“Mom!” I protested. Had I been several years older, my retort might have included a lot of expletives.

She simply cackled and disappeared, leaving me alone to finish watching the movie she just ruined. When Heston finally discovers the Statue of Liberty half-buried in sand, confirming he’s been back home the entire time, it was almost anti-climactic. Mom gave away one of the greatest twist-endings in movie history, just for a giggle.

Years later, I was ready to defend my wife against potential attackers when she was unconsciously guilty of the same crime. We went to see Alien 3 on the night it premiered. This was an extremely anticipated sequel at the time. After it was over, as we were leaving the theater and passing a long line of people waiting for the next showing, my wife blurted out, “I can’t believe they killed Ripley!”

You wouldn’t believe the venomous glares directed right at her. If human eyes were equipped with weaponized lasers, I’d have been a widower right then and there. But she didn’t mean to ruin the movie for anyone else (and if you’ve ever seen Alien 3, you know the movie was already ruined before it was ever released); it was just an outpouring of emotion. It wasn’t like she went up to each individual in line and snickered, “Ripley dies.” If she had done that, I’d have cut my losses and sought marital bliss elsewhere.

With enough therapy, I got over what my mom did to me with Planet of the Apes, but I also developed zero-tolerance for anyone who takes actual pleasure in giving away movie endings (such as the legions of internet trolls today). What the fuck does someone hope to accomplish by doing that? Do they think others are impressed they’d already seen the film, are they just douchebags who think it’s funny to ruin the experience for someone else? I’m not sure why anyone gets off on doing this, just like I’m still unsure of why my mom thought it was so funny to ruin Planet of the Apes for me all those years ago. Yeah, I was ready to defend my wife for doing the same thing, but that was different. Aside from the fact I was sleeping with her, she wasn’t consciously trying to ruin a movie for others. She was just caught up in the moment.

For the rest of you...you do not impress anyone by giving shit away. That's just an asshole thing to do. All you do is piss people off. So stop it...