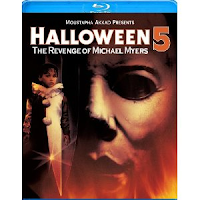 Like most horror franchises that take a decent premise and milk it to death, each "Halloween" sequel has gotten progressively worse. "Halloween 5" continues this downward spiral.

Honestly, there should never have been even one sequel to the original. Though I personally think it's a bit over-praised, John Carpenter's "Halloween" was scary because of its sheer simplicity: Michael Myers was an evil killing machine with no real motive, and back in '78, the idea of a killer who refused to stay dead was somewhat new and pretty chilling. And the scene where Loomis (Donald Pleasence) peers out the second story window to see Myers has disappeared ranks as one of the creepiest final shots of any horror film ever made.
Setting aside the dozens of rip-offs which followed in its wake, the "Halloween" sequels crapped all over the original by continuing Myers' story, adding new plot developments like making his killing spree some kind of family vendetta by stalking Laurie Strode (Jamie Lee Curtis), whom we learn is his sister, and hinting he's some sort of supernatural entity. But the more we learn what makes Myers tick, the less scary he becomes.

I know I'm in the minority on this, but I think the franchise would have been better off going in the direction attempted in "Halloween III," an in-name-only sequel which may not be very good, but at least there was an attempt to do something unexpected and different. The movie tanked, so the obvious solution was to bring Myers out of mothballs to slaughter more distant relatives and poor rubes who stand in his way. "Halloween 4" was a competent but by-the-numbers slasher film that pleased those upset over the previous sequel's change in direction. By now, however, the idea of an unkillable psycho no longer shocks anyone...we pretty-much expect it.

And sure enough, Michael Myers is back for "Halloween 5," a ridiculous sequel which sees Myers resurrecting from a coma a year after the events in "Halloween 4" to continue stalking sister Laurie Strode's little daughter (Danielle Harris, who'd go on to be a scream queen in her own right). Adding to the idiocy is a mysterious man in black who's also pursuing Myers. His motives are never given. Those are saved for "Halloween 6," but trust me, the revelation turns out to be as stupid as it is pointless. How stupid? Well, how about the fact that those entrusted with continuing the franchise were more-than-willing to toss aside all the events of "Halloween 4-6" once Jamie Lee Curtis agreed to return for "Halloween H20?"

But as part of a discarded trilogy within a franchise, "Halloween 5" isn't totally worthless. Donald Pleasence gives his all, as usual, since this franchise kept him employed throughout the 80s. There are some well-executed death scenes and, as silly as this man-in-black character is, the final scene does compel the viewer to check out "Halloween 6." And it isn't the worst film in the franchise...that dubious title could be fought over by "Halloween 6," "Halloween: Resurrection" or either of Rob Zombie insane reboots. Still, this disc is mostly for die-hard completists only.