DEMENTIA (1955): A Classic for the Chemically Altered 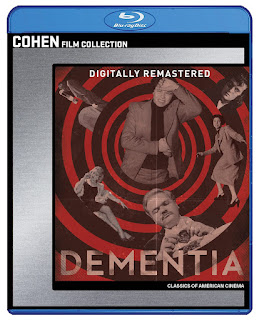 What the hell did I just watch?

Thank God I never saw Dementia back in the days when hallucinogens were part of my nutritious breakfast. It might have caused permanent psychological damage. For those who currently enjoy indulging in similar forms of chemical recreation, I guess you can consider that a recommendation.

Not quite a horror film, this avant garde obscurity unfolds like a fever dream, the kind where you might even be aware you’re dreaming, but somehow can’t wake up. In fact, would-be auteur John J. Parker based it on a dream his secretary (Adrienne Barrett, who also stars) apparently told him.

Though nicely remastered, it’s a pity this disc doesn’t include any supplemental bonus features besides an alternate cut, because Dementia has an interesting history. Most of its imagery might seem a bit quaint today, but in 1953, it was enough to keep the film from getting a proper release for a couple of years. Even now, some of these scenes are undeniably effective.

The plot? Hmm…like a dream, the narrative is appropriately disjointed - often perplexing - moving from one scene to the next with only a distressed young woman - ‘the Gamine’ - as the connecting tissue. I suppose the nutshell plot has her on the run after stabbing a man to death. She’s being chased by a cop that looks exactly like her dead father, whom she also stabbed after he shot her mother. It’s a hallucinatory journey through the night streets, with the Gamine accosted by a variety of abusive men, including one identified in the credits as ‘Evil One’ (Richard Barron). Based on her interactions with him, he appears to be Gamine's pimp, since he arranges the ‘date’ with the man she stabbed (and she later severs his hand with the same switchblade).

Aside from the sci-fi tinged music score, select sound effects and some moments of quasi-sadistic laughter, Dementia is silent, driven entirely by the surreal black & white imagery, which grows increasingly bizarre as the film unfolds. The climax - set in a seedy jazz club - is both unnerving and ambiguous, like those apex moments of our nightmares that are distressing enough to finally jolt us awake.

Maybe we’re expected to infer some deeper theme buried beneath the surface - The nature of abusive relationships? The manifestation of guilt? - but man, that’s an awful lot of digging and there still might be too many rocks to make it worth the effort. Dementia ultimately works best as a purely sensory experience, a creepy little tone poem that’ll likely keep adventurous viewers - and the chemically altered - engaged for its brief running time.

DAUGHTER OF HORROR - Recut version of Dementia, with added narration by Ed McMahon (yeah, that Ed McMahon), though the story is essentially the same. Unlike the feature film, this one has not been restored, so it looks & sounds pretty ancient.