VINYL NATION Preaches to the Choir 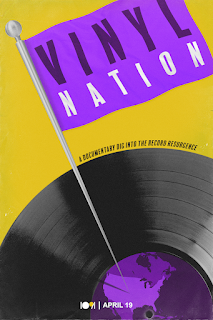 Ain’t it cool that vinyl records are back?

Not just as some fad embraced by hipsters and audiophiles, they're once again relevant to the music industry. While nothing is likely to ever erase the scourge of digital downloads, vinyl is currently the biggest selling physical format. Kinda makes me wish I didn’t unload all my albums back when records were first rendered uncool. Recently re-buying Reign in Blood set me back almost thirty bucks.

Record collecting today is expensive, but as everyone featured in Vinyl Nation lovingly attests, the tactile joys far outweigh the cost (as does the oddly cathartic act of watching them spin). We meet die-hards of all ages - from kids to old cronies - who sing vinyl’s praises while showing off their own collections. The film also visits new and landmark record stores from around the country. Speaking with their owners, it’s obvious most of them do this as a labor of love.

Everyone’s enthusiasm is infectious, though they’re ultimately preaching to the choir. Vinyl Nation is likely to be of the most interest to other record lovers, who’ll certainly appreciate the repeated confirmations that music still has value and collecting discs is awesome. But what’s really interesting is when the film focuses on a few record manufacturing plants, some which weathered the storm when the format was at its nadir, others that have sprung up during vinyl’s resurgence. Despite being a 100-year-old technology, how they work has always been a mystery to me and watching the process is fascinating. We even visit the headquarters of Crosley, the company that manufactures portable - and affordable - turntables, many of which appear designed to turn younger folks on to vinyl (I’m listening to one right now).

Still, records remain a comparative niche market for music lovers, the same which could be said for Vinyl Nation. The grand tour of stores, factories and conventions will certainly fascinate record buyers, who will also find the interviews with like-minded audiophiles pretty charming. Conversely, those whose entire collection is stored on their phone will wonder why these folks are wasting so much money.

Now if you’ll excuse me, I’m off to grab that overpriced Volbeat album I’ve been eyeballing.