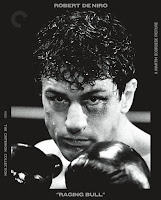 😺RAGING BULL on 4K and Blu-ray 7/12 from Criterion.
With this stunningly visceral portrait of self-destructive machismo, Martin Scorsese created one of the truly great and visionary works of modern cinema. Robert De Niro pours his blood, sweat, and brute physicality into the Oscar-winning role of Jake La Motta, the rising middleweight boxer from the Bronx whose furious ambition propels him to success within the ring but whose unbridled paranoia and jealousy tatter his relationships with everyone in his orbit, including his brother and manager (Joe Pesci) and gorgeous, streetwise wife (Cathy Moriarty). Thelma Schoonmaker’s Oscar-winning editing, Michael Chapman’s extraordinarily tactile black-and-white cinematography, and Frank Warner’s ingenious sound design combine to make Raging Bull a uniquely powerful exploration of violence on multiple levels—physical, emotional, psychic, and spiritual. In addition to a 4K digital master, the set includes a large selection of new and vintage bonus features. 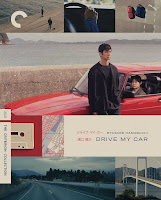 😺DRIVE MY CAR on Blu-ray and DVD 7/19 from Criterion.
Only Ryusuke Hamaguchi—with his extraordinary sensitivity to the mysterious resonances of human interactions—could sweep up international awards and galvanize audiences everywhere with a pensive, three-hour movie about an experimental staging of an Anton Chekhov play, presented in nine languages and adapted from Haruki Murakami stories. With Drive My Car, the Japanese director has confirmed his place among contemporary cinema’s most vital voices. Two years after his wife’s unexpected death, Yusuke Kafuku (Hidetoshi Nishijima) arrives in Hiroshima to direct a production of Uncle Vanya for a theater festival and, through relationships with an actor (Masaki Okada) with whom he shares a tangled history and a chauffeur (Toko Miura) with whom he develops a surprising rapport, finds himself confronting emotional scars. This quietly mesmerizing tale of love, art, grief, and healing is ultimately a cathartic exploration of what it means to go on living when there seems to be no road ahead. 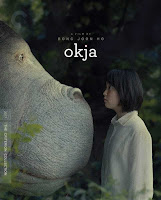 😺OKJA on 4K, Blu-ray and DVD 7/5 from Criterion.
Master genre exploder Bong Joon Ho swirls pathos, dark satire, action, and horror into an exhilarating twenty-first-century fairy tale. An all-star cast including Tilda Swinton, Paul Dano, Steven Yeun, and Jake Gyllenhaal is led by An Seo Hyun as Mija, a South Korean girl growing up on an Edenic mountainside with her grandfather and best friend: Okja, a giant, empathetic “superpig” created as part of a secret GMO experiment. When Okja is abruptly torn away from her, Mija embarks on a perilous rescue mission that places her at the center of a sinister corporate conspiracy. While Bong’s trademark virtuosic set pieces dazzle, Okja’s beating heart is the connection between a girl and her superpig, made all the more poignant by the brilliant special effects that bring the animal star to unforgettable life. Includes a 4K master, approved by Bong Joon Ho, as well as numerous bonus features. 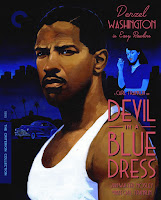 😺DEVIL IN A BLUE DRESS on 4K and Blu-ray 7/19 from Criterion.
The bone-deep disillusionment of postwar film noir becomes a powerful vehicle to explore America’s racial injustices in Carl Franklin’s richly atmospheric Devil in a Blue Dress, an adaptation of the hard-boiled novel by Walter Mosley. Denzel Washington has charisma to burn as the jobless ex-GI Easy Rawlins, who sees a chance to make some quick cash when he’s recruited to find the missing lover (Jennifer Beals) of a wealthy mayoral candidate in late-1940s Los Angeles—only to find himself embroiled in murder, political intrigue, and a scandal that crosses the treacherous color lines of a segregated society. Featuring breakout work by Don Cheadle as Rawlins’s cheerfully trigger-happy sidekick, this stylish mystery both channels and subverts classic noir tropes as it exposes the bitter racial realities underlying the American dream. Includes a 4K master, approved by Carl Franklin, as well as numerous bonus features.
Posted by D.M. Anderson at 8:32 AM