DEATH ON THE NILE is Another Affectionate Throwback 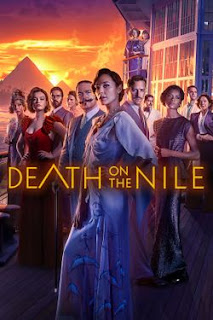 Death on the Nile is now available on Digital, Blu-ray and DVD.

Like his better-than-expected Murder on the Orient Express, Kenneth Branagh’s follow-up, Death on the Nile is not-only based on another classic Agatha Christie novel, it’s a story that’s been previously adapted more than once, the most famous being the 1978 film featuring Peter Ustinov (though the best is from the British series, Poirot, with David Suchet).

Of course, there’s a good chance a majority of the audience never read the book or saw any of the other versions. But considering how iconic the novel is - as well as its main character - there’s an equally good chance many folks will know who the killer is before the film even starts, especially since it pretty-much sticks to the original story. To do otherwise would be to unravel the plot and character complexities Christie worked so hard to weave in the first place.

However, while Death on the Nile remains respectfully faithful to its source material, we do get a prologue that gives us a back-story behind Hercule Poirot’s legendary mustache. Though completely inessential to the plot, it’s nevertheless unexpected, as is the reveal that there was once a woman in Poirot’s life, her fate ultimately being what prompted him to focus all his energies on investigative work.

Elsewhere, Death on the Nile assembles another big cast, who are clearly enjoying the opportunity to appear in a good old fashioned whodunit. Branagh once again slips comfortably back into the director’s chair - as well as Poirot’s mustache - guiding the likes of Gal Gadot, Annette Bening, Russell Brand, Emma Mackey, Ali Fazal and Sophie Okonedo through Christie’s twist-laden tale. As with Murder on the Orient Express, the story takes awhile to gain momentum, but once Poirot starts grilling suspects (i.e. everybody), the film is pretty enjoyable.

If Murder was better than expected, then Death on the Nile more-or-less delivers as expected, which is all anyone can really ask from a sequel. It’s another affectionately assembled throwback to mysteries of yesteryear, with slick production design and a solid cast, all in support of a classic story that would be difficult to screw up.

FEATURETTES - “One of the Greats”; “Death on the Nile: Novel to Film”; “Agatha Christie: Travel Can Be Murder”; “Design on the Nile”; “Branagh/Poirot”