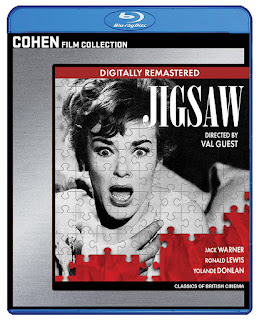 Director Val Guest had a pretty eclectic career. Though probably best remembered for such British sci-fi classics as The Day the Earth Caught Fire and the first two Quatermass films, he was adept in a variety of genres…comedies, dramas, thrillers, war films, even a musical or two.

Considering most of his early work consisted of comedies, perhaps it’s no surprise that even some of his darker films featured bits of subtle, dry humor and slightly quirky characters. The 1962 crime drama, Jigsaw, is no exception.

The film begins with a woman’s murder at the hands of someone she obviously knows, even calling him by name…Johnny. Shortly after, Detectives Fellows (Jack Warner) and Wilks (Ronald Lewis) are investigating the break-in of a real estate office. Oddly, all that was taken were lease contracts. This leads them to a home rented by John Campbell, where they discover parts of the woman’s dismembered corpse.

The story is primarily a police procedural, but in a somewhat interesting narrative turn, the detectives know who they’re supposed to be looking for. The real mystery is the victim’s identity. Clues lead them to believe it’s Jean Sherman (Yolande Dolan, Val’s wife), only to find her alive, though she did have a one-night stand with their suspect at the same house as the murder. Now Fellows and Wilks need her to identify Campbell…if that’s his real name, and if they can even find him.

Despite a slow start, Jigsaw tells an engaging story with a few nifty surprises here and there (at the very least, you aren’t likely to predict the murderer’s identity). The film is also punctuated by some witty dialogue, mostly the banter between Fellows and Wilks, as well as some of the beleaguered underlings. As a weary, seasoned cop, Warner’s droll performance is especially amusing.

With a title befitting the plot, Jigsaw is an enjoyable police procedural, though with more red herrings than the story probably needs. Adapting Hillary Waugh’s novel (who penned a series of books featuring Detective Fellows), it’s well written & directed by Guest, one of British cinema’s most reliable journeymen.
EXTRA KIBBLES
TRAILER