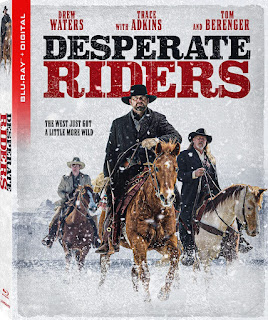 If the name doesn’t ring a bell - and why would it? - Michael Feifer is a prolific producer-director who cranks out the kind of anonymous, budget-conscious fare that pads-out cable schedules and competes for space on Walmart shelves (generally priced low enough to encourage folks to buy it sight-unseen).

Feifer appears to specialize in specific genres…Christmas movies, thrillers with women in peril, and westerns. Most tout a famous face or two above the title, but in reality, those actors play minor roles, showing up for a few days’ work in exchange for prominent billing and a paycheck (in this case, Tom Berenger and Trace Adkins). Nice work if you can get it. More often than not, the real leads are played by people you’ve never heard of.

The actual star of the accurately titled Desperate Riders is Drew Waters, who has yet to earn his own Wikipedia page but guest-starred in a lot of TV shows (as well as numerous other Feifer flicks). He plays a gunman named Kansas Red, who reluctantly agrees to help young Billy (Sam Ashby) rescue his mom, Leslie (Vanessa Evigan). She’s been “kidnapped” by Thorn (Trace Adkins), a brutal outlaw who escaped from prison to claim her as his wife. But even though Thorn just slaughtered her husband, friends and their hired hands, she’s actually in love with the guy.

Red, Billy and Carol - a feisty family friend who escaped Thorn - hit the trail in pursuit. A majority of the laborious middle act is their journey through the wilderness, with Red and Carol constantly bickering before (of course) falling in love. Scenes of any real action are few and far between, and despite being a supposedly fearsome gunfighter with the obligatory dark past, Red is bland, boring and doesn’t demonstrate any particularly impressive skill besides getting shot (an admittedly funny running gag). Overall, the performances are serviceable without ever being interesting. But despite being central to the plot, Adkins isn’t in the film all that much. Berenger only appears at the beginning and end and his character is completely superfluous.

Desperate Riders is further hampered by a western cliches (“I’m gonna form a posse!”), lazy writing, clumsy editing and badly-conceived characters (especially Leslie). The film’s chintzy budget is sometimes a glaring distraction, such as scenes where our heroes brave winter weather, featuring the worst CGI snowstorm you’ll ever see. But even all that would be okay if the film at-least moved. Instead, the interminable pace only exacerbates its shortcomings.

Ultimately, there are scores of other westerns more worth our time, even a few directed by Feifer himself (Last Shoot Out, released on Blu-ray only a month or so ago, was derivative but fun). Desperate Riders is simply a cheap, dull pastiche of familiar tropes, punctuated by a couple of fleeting familiar faces. It's a film as generic as its title.

This has to be one of the worst movies I've ever watched. Everything about it was awful. The women looked like they just stepped out of a hair salon, false eyelashes, lipstick, full makeup, platinum blonds curls, basically models in cowboy hats minus the iPhone. The set was the Warren County Fairgrounds in Tennessee and a couple historic houses. Everything was bad, acting (can I call it that?) dialog, sets, scenes, directing, and storyline.
Don't take my word for it, go ahead and buy, rent or stream this movie, but don't say I didn't warn you.
I honesty can't believe this was produced, and those actors(?) have to be embarrassed.