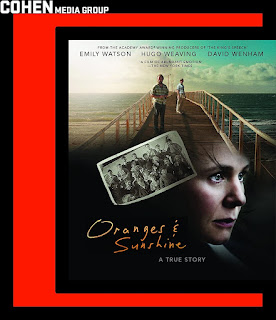 That was my first reaction while watching Oranges and Sunshine. But indeed it did, right under most of our noses. I don’t recall this borderline-atrocity perpetuated by Britain and Australia ever making international headlines, even though it had been going on for decades. Nor do I remember this film enlightening audiences 12 years ago.

In 1986, Nottingham social worker Margaret Humphreys (Emily Watson) is accosted by a woman who claims she was shipped to Australia as an orphaned child along with many other kids. Since deporting orphaned kids isn’t legal, Margaret is initially skeptical, at least until another woman in her therapy group mentions being reunited with her long lost brother, Jack (Hugo Weaving), who was also shipped-off as a boy.

Supported by husband Merv (Richard Dillane), Margaret begins to dig further, eventually discovering that thousands of children were taken and deported to Australia during the ‘50s and ‘60s, often told their parents were dead. Though promised days of sunshine and “picking oranges from the trees for breakfast” (to quote Jack), a lot of them essentially became slave labor for Christian institutions. Worse yet, the boys sent to Bindoon - a remote orphanage - were often subjected to sexual abuse.

Now middle-aged, these people want to know who they are, why they were deported and whether or not their parents are still alive. Their plight becomes a crusade for Margaret, regardless of the emotional toll it takes on her (and her family). Despite increased media attention - both positive and negative - she finds an unexpected ally in Len (David Wenham), who initially comes across as an overbearing bastard, but was also one of the abused orphans and his bluster is simply a wall he’s built as a way of coping with the past. The friendship he develops with Margaret comprise the film’s most subtly affecting moments.

Elsewhere, Oranges and Sunshine deftly - and repeatedly - shifts tonal gears between heartwarming and heartbreaking. Some of the stories these orphans share with Margaret are harrowing, while the reunions are suitably uplifting (even if Len’s meeting with his own mother remains ambiguous). Watson delivers a strong, empathic performance, her character seldom backing down from threats or government efforts to avoid responsibility. And despite many shocking revelations - at least for those unaware this was happening - the film never devolves into sensationalism, focusing on the humanistic aspects of the story, as well as the effect on Margaret’s own life.

Ultimately, Oranges and Sunshine is an engaging emotional rollercoaster, stopping just short of providing closure to its own story (though ending on a promising note). Terrific performances and respect for its subjects are anchored by a strong script by Rona Munro (adapting Humphrey’s book). Moreover, we leave with the impression that what's depicted here is pretty accurate, so if you aren’t just a little bit outraged by the time the credits roll, you haven’t been paying attention. It’s still hard to believe this really happened…and not all that long ago.