LAST LOOKS: Film Noir with a Sense of Humor 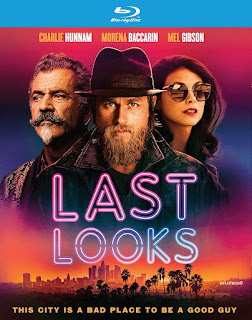 Charlie Waldo is the main character in a series of comic noir novels by Howard Michael Gould. Though I haven’t read any of them, the author also wrote the screenplay for Last Looks - based on the first book - so I’m assuming this film is a fairly faithful adaptation. If that’s the case, I’ll have to check out more of his work because he’s quite adept at creating quirky, interesting characters.

Charlie Hunnam plays Waldo, a disgraced ex-cop now living as a recluse in a trailer in the middle of nowhere. Amusingly, he insists on only keeping 100 possessions at any time (which also includes a chicken). When an old flame arrives asking for help with a case, he initially refuses…at least until some thugs come by later, beat him up and warn him not to get involved.

I’m listing off most of the supporting players because, like such films as Get Shorty, this one is driven more by its characters than the plot. Most of them - including the antagonists - are pretty amusing, sometimes even upstaging Waldo. As if channeling the late, great Peter O’Toole in My Favorite Year, Gibson hasn’t been this engaging in a long time. However, as a tough-talking dealer with a hidden creative side, Scipio steals every scene he’s in.

Maybe a little too laid-back at times - with a plot that’s ultimately superfluous - Last Looks is still very enjoyable. Gould and Director Tim Kirkby have created a charming homage to film noir and infused it with an offbeat sense of humor. Though not always laugh-out-loud funny, it’s consistently witty and features characters who might be worth revisiting from time to time.