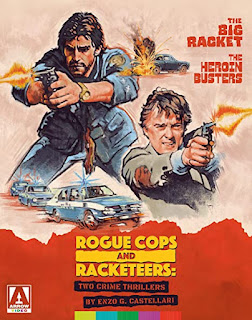 The Big Racket and The Heroin Busters are my first Poliziotteschi films. For those unfamiliar with the term, it’s a subgenre of Italian action movies that generally feature corruption, organized crime, renegade cops and no-small amount of vigilantism. Sort of the bastard son of Giallo, there’s more emphasis on brutal action than atmosphere or suspense, but the pulpy, sensationalistic approach to filmmaking remains. As such, these films are a lot of kick-ass fun.

This terrific - and accurately titled - boxed set, Rogue Cops and Racketeers, collects two Poliziotteschi films from the mid-70s, which was the height of the genre’s popularity. Both are directed by Enzo G. Castellari, a somewhat underrated Italian filmmaker who’s cranked out a lot of reliably entertaining exploitation movies in a variety of genres.

1976’s The Big Racket is the better of the two. It’s also the most violent, which includes a couple of tough-to-watch rape scenes that make the one in Death Wish look docile. But elsewhere, the movie serves up some rousing revenge. Fabio Testi plays Nico Palmieri, a reckless cop who goes up against a sadistic gang of racketeers terrorizing local businesses. After being stripped of his badge, he decides to deal some street justice with the help of a family friend, a guy he once busted and a couple of recent victims who have payback in-mind. Fast-moving and ferocious, the story eschews plausibility in favor of action and retribution.

1977’s The Heroin Busters also stars Testi, along with several other Castellari favorites. In this one, Testi is Fabio, an undercover cop who gets in deep with the criminal underworld, posing as a heroin dealer. His lone contact outside of the mafia is detective Mike Hamilton (David Hemmings), who goes to great lengths covering for him, including a Fabio-led robbery of their own precinct. The story is a little convoluted at times, but recovers nicely during the bravura final act, a lengthy chase which has Fabio trying to escape the mob once his cover is blown.

Neither of these are what anyone would mistake for artistic achievements - like most Castellari films - but they’re sure a gung ho good time. This set includes great restorations for both, which are presented in both English and Italian, along with a slew of brand new bonus features for each. As such, Rogue Cops and Racketeers is a nice introduction to Poliziotteschi, and if these two titles are indicative of what the genre has to offer, sign this guy up for more.

THE YEARS OF RACKETEERING - Interview with director Enzo G. Castellari.

HOW THEY KILLED ITALIAN CINEMA - Interview with editor Gianfranco Amicucci.

A COP ON THE SET - Interview with retired “poliziotto” (cop) Nicola Longo.

THE EARDRUM BUSTERS - Music historian/collector Lovely Jon discusses the career Goblin, who scored the film.Being a fan of the band - and its many line-ups - this is my personal favorite of the bonus material.