SINGIN' IN THE RAIN (4K): The Definition of Joy 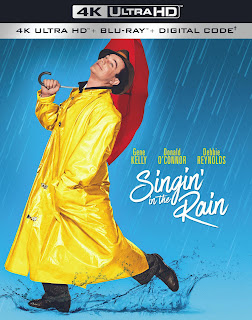 I don’t believe I’ve ever met anybody claiming to completely dislike Singin’ in the Rain, and suspect that many who do probably haven’t actually sat down to watch the film in its entirety (kinda like when my folks once declared their utter hatred of Iron Maiden based on hearing one song). We’re all familiar with Gene Kelly’s iconic performance of the title tune, but really, the whole film can't be defined that one scene. I would argue that it isn’t even the best moment.

70 years on, Singin’ in the Rain is the quintessential musical and has lost none of its magic. Like such classics as Star Wars, it’s one of those films that transcends its genre to even appeal to those who don’t normally go in for this sort of thing. Such as yours truly. This remains the only musical ever made that I’ve been happy to revisit multiple times.

It had been awhile since I’d last seen it - at least a decade - and rather than summarize a plot most are familiar with, I thought I’d share a few takeaways that came to my attention this time around…

One thing, however, has always been obvious. If joy could be defined by a single film, you’d be hard-pressed to name a better example than Singin’ in the Rain. Every scene is an exercise in charm, exuberance, style and technical virtuosity, something even musical curmudgeons must grudgingly concede. Now in 4K, the film has never looked or sounded better, and its technical specs are the main reason for doing an upgrade, since the bonus features are all carried over from the 2012 Blu-ray (also included in this set).

“JUKEBOX” OPTION - Allows viewers to jump to any of the 14 songs in the film.