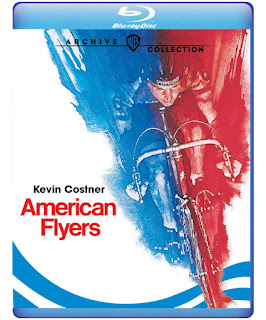 In the very first scene of American Flyers, sweaty, super-tan David Sommers (David Grant) is furiously speeding through town on his ten-speed. He’s wearing a cowboy hat and extremely short cut-offs, his ride punctuated by a soundtrack featuring your standard-issue, booming ‘80s rock tune, complete with synths & soaring vocals. It might be the single most unintentionally funny scene I’ve watched in a long time.

Just minutes later, a pre-stardom Kevin Costner, playing older brother Marcus, shows up wearing a pornstache that looked out of place even in the ‘80s. Even though I saw this movie back in the day, I laughed again because Costner’s such a household name today that seeing him with such conspicuously archaic facial hair is flat-out bizarre.

I say this because certain aspects of American Flyers have aged so badly that they’re almost a distraction. Virtually every frame and synthesizer chord screams the decade from which they sprang. Revisiting the movie today is a reminder of just how goofy the ‘80s were…right up there with Swatches, New Coke and Krokus videos. Not only that, there’s enough blatant product placement to make Mac & Me look like a John Cassavettes film.

Since the movie is practically a period piece, the nostalgic appeal might be pretty high for those who fondly recall the era. For those who didn’t, there’s plenty of fun to be had at the film’s expense, which might also apply to some of the characters, performances and derivative plot…another triumph-of-the-underdog sports flick, with two estranged brothers bonding during a grueling marathon bike race while their women (Rae Dawn Chong & Alexandra Paul in thankless roles) cheer them on.

Okay, it ain’t quite that cut & dry. Some troubled family relationships muddy the waters, as does a somber revelation about one of the brothers. But for the most part, the basic story is pretty familiar, which might suit fans of the genre just fine. However, screenwriter Steve Tesich’s other bicycle film, Breaking Away, was far more charming, with unique characters and authentic performances. Costner is good - even with the ‘stache - but Grant isn’t particularly engaging. Rival biker and antagonist Barry “The Cannibal” Muzzin is an overbearing, obnoxious caricature (played with ridiculous intensity by Luca Bercovici).

Still, American Flyers is a fairly agreeable way to spend an evening. Director John Badham - whose career was flying high at the time - was always adept at creating slick, easy-to-digest entertainment. This one doesn’t rank up there with his best work (such as Saturday Night Fever & WarGames), but it’s certainly indicative of the high-concept audience pictures we typically associate with the ‘80s. Viewers of a certain age might consider that to be one of its most cheekily endearing qualities. And be on the lookout for Jennifer Grey - another ‘80s icon - in a small role.