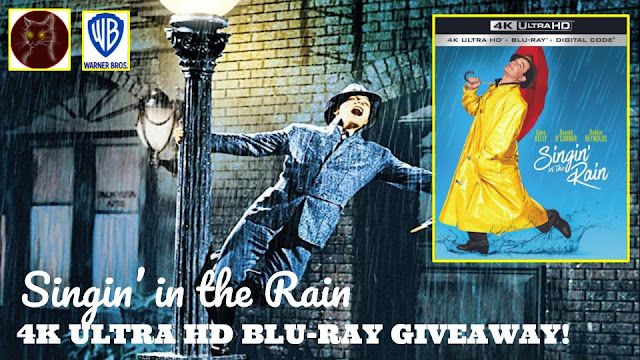 FREE KITTENS MOVIE GUIDE is giving away a 4K Ultra HD copy of the classic, SINGIN’ IN THE RAIN, courtesy of WARNER BROS HOME ENTERTAINMENT.

Singin’ in the Rain is widely considered to be one of the greatest musical films in cinematic history. The musical romantic comedy was directed and choreographed by Gene Kelly (On the Town) and Stanley Donen (On the Town) and stars Kelly, Donald O’Connor, Debbie Reynolds, Jean Hagen, Millard Mitchel and Cyd Charisse. The film was written by Adolph Green and Betty Comden and produced by Arthur Freed. The music is by Nacio Herb Brown and the lyrics are by Arthur Freed. O'Connor won the Golden Globe Award for Best Actor – Motion Picture Musical or Comedy, and Betty Comden and Adolph Green won the Writers Guild of America Award for their screenplay, while Jean Hagen was nominated for the Academy Award for Best Supporting Actress. In 1989, Singin' in the Rain was one of the first 25 films selected by the United States Library of Congress for preservation in the National Film Registry for being "culturally, historically, or aesthetically significant".

Shoot us an email at freekittensmovieguide@gmail.com