THE LONG NIGHT: Another Case of Deja Boo 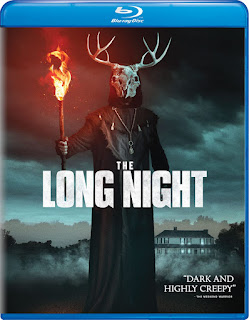 There’s an early moment when the protagonists are heading to the destination a majority of the film takes place, scored by a piece of music that was also used in The Shining. It even looks remarkably similar to the scene where the Torrances are driving through the mountains toward the Overlook hotel.

Was this a respectful homage, or did director Rich Ragsdale assume no one would notice he poached one of the most iconic horror movies ever made? If you believe what Ragsdale states in the audio commentary, neither is actually true.  He always liked that particular piece of music and it wasn’t until later that he noticed the striking similarities between his scene and the one in The Shining.

Okay, we can give him that one. After all, I once wrote what I thought was the greatest short story of all time, only for several people to point out that I basically rewrote “The Lottery.” That being said, the rest of The Long Night ain’t exactly bursting with originality, either. But since originality in horror is pretty rare anyway, let’s not hold that against it.

The story features scream queen Scout Taylor-Thompson as Grace, who drags boyfriend Jack (Nolan Gerald Funk) to her small hometown in search of her parents. However, when they arrive at the plantation home of the man who provided her with the lead, they become surrounded and trapped inside by a mysterious cult. Armed with torches and wearing robes & animal skulls, we’ve seen guys like this before. Still, they’re kinda creepy, standing silently in the dark, occasionally stabbing someone to death (such as budget bin hero Jeff Fahey in what’s essentially a glorified cameo).

It turns out this cult - with a leader who seems to possess supernatural abilities - have actually lured Grace to this place for a dark purpose. Without getting into specifics, Ragsdale and his writers - intentionally or not - borrow a little from Rosemary’s Baby as well. On the plus side, that inspiration leads to a birth scene that’s easily the film’s gruesome highlight.

While there aren’t too many surprises elsewhere, the film is pretty atmospheric, suitably violent and wastes little time getting to the story. Anchored by decent overall performances, The Long Night doesn’t win any awards for originality, but it’s far from the worst of its kind.

FEATURETTES - “The Birthing” (the making of the film’s most gruesome scene); “The Look” (with cinematographer Pierluigi Malavasi & director Rich Ragsdale); “The Score” (with composer Sherri Chung).