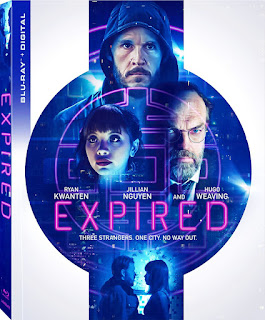 One has to admire the low budget attempts to give Expired a futuristic look…fog, wet streets, multi-colored lights floating across the sky & background. And of course…plenty of neon, pretty much a staple of sci-fi cities ever since Blade Runner. Being that Hong Kong is already a neon wonderland, much of the production design takes care of itself.

The film also appears to be aiming for a similar slow-burning, neo-noir vibe as Blade Runner. However, Expired is a colossal bore.

Jack (Ryan Kwanten) is a brooding killer-for-hire who’s feeling increasingly detached from humanity, at least until he meets lounge singer/escort April (Jillian Nguyen), whom he believes is a kindred spirit. Unfortunately, her presence is causing him to become physically weaker and sicker. He later learns from reclusive ex-researcher Dr. Bergman that Jack was once part of a life-extension experiment, but now his sudden attack of the feels has awakened dormant hormones that severely hamper any chances at immortality. Bergman advises Jack that if he wants to keep on living, he’s got to stop seeing April and go back to behaving like a machine…

…which plays into Expired’s heavy-handed - and derivative - theme of clinging to humanity in an increasingly mechanized world. Ivan Sen directs his own screenplay, which is not only slow and convoluted, the dialogue is phenomenally pretentious. Every character speaks like Emily Dickinson being paraphrased in an emo teen’s diary after a bad day. Kwanten’s slurred, lethargic voice-over narration adds nothing to his character, nor does his thousand yard stare whenever co-stars are speaking.

There’s something wrong with any movie where the best moment is the first one, when Jack shoots his mark point-blank in an alley. Afterwards, anything resembling action ceases and Expired descends into interminable scenes of the three main characters wallowing in sorrow. The film's glacial pace only exacerbates all of its shortcomings. While there’s an earnest attempt at a poignant resolution, chances are the viewer’s patience will expire long before then.