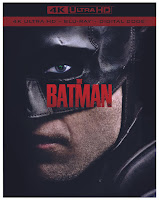 😺THE BATMAN on 4K, Blu-ray & DVD 5/24, Digital Premium Ownership & HBOMax 4/14 from Warner Bros.
Unmask the truth behind Gotham City’s vigilante detective and his alter ego, reclusive billionaire Bruce Wayne, when “The Batman” arrives for Premium Digital Ownership at home on April 18. The film is directed by Matt Reeves from a screenplay by Reeves and Peter Craig, based on characters created by DC, and stars Robert Pattinson (“Tenet,” “The Lighthouse”). The film will also be available to stream on HBO Max on April 18 and will be available on 4K UHD, Blu-ray and DVD beginning on May 24. The film also stars Zoë Kravitz (TV’s “Big Little Lies,” “Fantastic Beasts: The Crimes of Grindelwald”), Paul Dano (“Love & Mercy,” “12 Years a Slave”), Jeffrey Wright (“No Time to Die,” TV’s “Westworld”), John Turturro (the “Transformers” films, “The Plot Against America”); Peter Sarsgaard (“The Magnificent Seven,” “Interrogation”), Jayme Lawson (“Farewell Amor”), Andy Serkis (the “Planet of the Apes” films, “Black Panther”) and Colin Farrell (“The Gentlemen,” “Fantastic Beasts and Where to Find Them”). The film was produced by Dylan Clark and Reeves, with Michael E. Uslan, Walter Hamada, Chantal Nong Vo and Simon Emanuel executive producing. 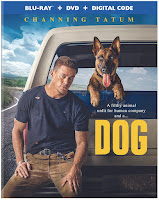 🐶DOG on Digital 4/19, Blu-ray and DVD 5/10 from MGM
Dog is a buddy comedy that follows the misadventures of two former Army Rangers paired against their will on the road trip of a lifetime. Army Ranger Briggs (Channing Tatum) and Lulu (a Belgian Malinois dog) buckle into a 1984 Ford Bronco and race down the Pacific Coast in hopes of making it to a fellow soldier's funeral on time. Along the way, they’ll drive each other completely crazy, break a small handful of laws, narrowly evade death, and learn to let down their guards in order to have a fighting chance of finding happiness. The film, arrives on Digital on April 19 from MGM and onto Blu-ray and DVD on May 10 from Warner Bros. Home Entertainment. From MGM in association with FilmNation Entertainment, Dog is directed by Reid Carolin & Channing Tatum in their directorial debut, from a screenplay by Carolin and story by Carolin and Brett Rodriguez. In addition to Tatum, the film stars Jane Adams (“Eternal Sunshine of the Spotless Mind”), Kevin Nash (“Magic Mike”), Q’orianka Kilcher (TV’s “Yellowstone”), Ethan Suplee (“Remember the Titans”), Emmy Raver-Lampman (TV’s “The Umbrella Academy”), and Nicole LaLiberte (TV’s “Dexter”). Gregory Jacobs, Peter Kiernan and Brett Rodriguez are producers, with Betsy Danbury and Ken Meyer serving as executive producers. 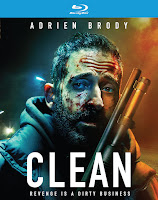 😺CLEAN on DVD and Blu-ray 5/10
Tormented by his past life, garbage man Clean (Adrien Brody) attempts a life of quiet redemption. But when his good intentions mark him a target of a local crime boss (Glenn Fleshler), Clean is forced to reconcile with the violence of his past. CLEAN was directed by Paul Solet (Tread, “Mars") who co-write the film with Adrien Brody (The French Dispatch, “Succession”). Along with Brody, the film stars Glenn Fleshler (Joker, “Billions”), Richie Merritt (White Boy Rick, “Euphoria”) Chandler Ari DuPont (Charm City Kings), Mykelti Williamson (Forrest Gump, The Purge: Election Year), RZA (The Man With Irons Fists), Michelle Wilson (Amazing Stories, A Shot Through The Wall), and John Bianco (“The Sopranos”). 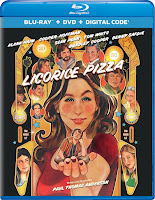