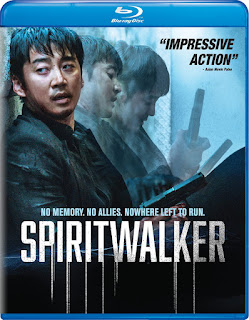 Remember the John Woo movie, Face/Off? Conceptually, it was as ridiculous as action movies can get, but so brilliantly directed and performed that only party-pooping nitpickers weren’t swept along. Those willing to cut Spiritwalker the same slack are in for a hell of a ride.

And indeed, the premise is similarly bonkers, unburdened by the restrictions of plausible science. Yoon Kye-sang plays a guy whose consciousness jumps from one stranger to another every 12 hours, assuming their appearance and control of their bodies. Each person he inhabits is in-some-way linked to the criminal underworld, and all of them are looking for a guy named Kang I-an. Of course, it turns out that he’s I-an, a cop who was trying to bust the sale of the same designer drug that’s now causing his body-jumps.

I-an eventually convinces a few people who he really is - partner/girlfriend Moon (Lim Ji-yeon) and an amusing homeless man named Haengryeo (Park Ji-hwan) - who help him not-only regain his memory, but try to find I-am’s actual body before corrupt agent Park (Park Yong-woo) does. In the meantime, I-am starts using his predicament to his advantage.

It takes a bit of time to acclimate ourselves to what’s happening (as well as how). Once we pick up the beat, however, Spiritwalker is a breathless sprint from one plot reveal and action scene to the next, both executed with enough flash and intelligence that we tend to forget the far-fetched aspects of the story. Building momentum the entire time, the film goes full-John Wick for its wild, bloody climax.

Complex but never confusing, Spiritwalker is the best kind of sci-fi/action film: fast paced, energetic and violent, with the unapologetic audacity to serve-up its outlandish premise with a completely straight face. So far, this is the best action movie of the year.