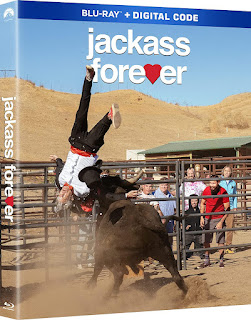 I never thought I’d be saying that to my daughters again. They’re 18 and 27, the days of popping in Finding Nemo for family movie night now a distant memory, as are the weekends when I’d introduce Lucy to my favorite horror films and turned Natalie into a fan of westerns. Today, they’re too busy with college, video games, friends and a social life to hang out with their old man as much as he’d like.

But at the mention of Jackass Forever, they came charging downstairs like a cat to a can opener. Too young to recall the TV show, they absolutely love the movies. And as much as I’m embarrassed to admit it, so do I. Though my wife politely declined this particular invitation to family movie night, the three of us gathered in the Dave Cave, ready to once-again unleash our inner 12-year-old boy. Being the first Jackass film in over a decade, it had been awhile.

The boys did not disappoint. They’re a little older now, and some of the original cast do not return, like Ryan Dunn (RIP) and Bam Margera (apparently a walking trainwreck these days). However, there are a few fresh faces who fit right in, including Rachel Wolfson, the first female cast member whose wince-inducing introduction involves a bit of scorpion venom Botox. But interestingly, the fact that some of these guys are now pushing 50 are part of the film’s charm. You’re never too old to enjoy punching a buddy in the balls.

Speaking of which, this one seems to be especially dedicated to demonstrating a variety of ways to assault the crotch. Pee-pees and nuts are regularly pounded, stung, bitten, injected with hot sauce, hit with hockey pucks, pressed between glass and baited to attract a variety of hungry critters. Elsewhere, the song remains the same, with stunts and pranks that are both hilarious and wince-inducing, along with a few that are obviously calculated to trigger the gag reflex (mission accomplished, by the way). I’d have to say my favorite bit has two guys wearing fishbowl helmets linked by a tube containing a tarantula.

What has always made the Jackass franchise unique - which YouTube imitators often fail to realize - is that it’s never cruel or mean-spirited. There’s even a bit demented genius behind some of these stunts, or at the very least, one hell of a lot of audacity in attempting them. And as Jackass Forever once again demonstrates, a big reason we find it all so funny is because the cast thinks it's funny. Their laughter is indeed infectious.

Perhaps a sign they aren’t getting any younger, both Steve-O and ringleader Johnny Knoxville land themselves in the hospital during the film. This prompts the question: How much longer can these guys keep this up? Is Jackass Forever the pinnacle of the franchise, or does adding new cast members suggest a passing of the baton to a younger crew? Let’s hope it’s the latter, because this stuff is still hilarious and a guaranteed fun family movie night with my girls. May they never outgrow the simple pleasure of watching this batch of bros brutalize themselves.

ADDITIONAL STUNTS - Some are stunts deleted from the film, others are bits that didn’t work out like they hoped, and a few are alternate versions of what made the final cut. Some cast members and director Jeff Tremaine are featured in introductions, talking about these scenes.