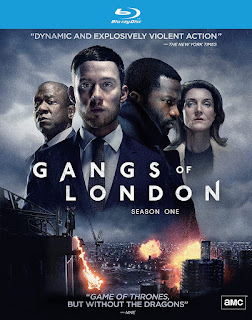 Review by Carl, the Couch Potato😻

For the most part, we are a site dedicated to movies and don’t spend much time reviewing television shows. When we do, it’s for a specific reason. This time, the reason is Gareth Evans.

For those not familiar with the name, Evans wrote & directed two of the best action movies of the previous decade, The Raid and The Raid 2, the latter of which is nearly epic in scope. As such, he’s the perfect guy to create a similarly sweeping gangster saga. He doesn’t disappoint, either.

Gangs of London may have been developed for TV, but the 10 episodes comprising Season One unfold like pure cinema, both narratively and aesthetically.

The main story thread begins with the murder of Finn Wallace (Colm Meaney), the head London’s most powerful crime family. Hot-headed son Sean (Joe Cole) takes over, ordering all business, shipping and importing to cease until it’s discovered who - or which rival family - killed his dad. This doesn’t sit well with Finn’s partner and life-long friend, Ed Dumani (Lucian Msamati), who’s brilliant son, Alex (Paapa Essiedu), is the one their investors believe should run the family.

Elliot Finch (Sope Dirisu) is an undercover cop who manages to get close to Sean, eventually becoming one of his most trusted soldiers. But after getting romantically involved with Ed’s daughter, Shannon (Pippa Bennet-Warner), his superiors - and the viewer - become concerned he may be crossing the line. Meanwhile, enemies both seen and unseen are making moves under Sean’s watch, sometimes against each other, other times to parlay their power once the dust settles. Because Sean is willing to go to war in response to the attack on his family - fully supported by his vengeful mother, Marian (Michelle Fairley) - those who wish a quick return to business as usual, including some lifelong friends & associates, come to the consensus that the Wallace empire would be better off if the Wallaces were dead.

The narrative is far more complex and complicated than that - though never difficult to follow - with dozens of well-rounded characters who play major roles in the surprising directions the story takes. Like Goodfellas, we may not like most of these people, but they’re sure-as-hell fascinating. Not only is it fast-paced, consistently intriguing and unpredictable, the series is loaded with the same brand of hard-hitting action and brutal violence Evans built his name with. If you thought The Sopranos was bloody, Gangs of London might redefine the word for you.

More importantly, the entire season plays like an epic, nine-hour gangster film, and even though certain late-episode plot turns lay the groundwork for the next season, the primary story comes to a bold, satisfying conclusion. The few cliffhangers we are teased with are more enticing than frustrating.

Ultimately, Gangs of London transcends its TV origins and ranks as one of the most gripping gangster stories I’ve seen in years. Conceptually similar to The Raid 2, Gareth Evans makes the most of the expanded platform series television provides, which includes an exponentially bigger body count. I can’t wait to see what Season Two has in store.

FEATURETTES - “An Inside Look at…” (five promotional featurettes accessible individually or with the ‘play all’ option): The World; The Families; The Action; The Soldier; Anatomy of an Action Scene.

MEE-OW! LIKE TAUNTING A MOUSE TO DEATH.
Posted by D.M. Anderson at 8:47 PM