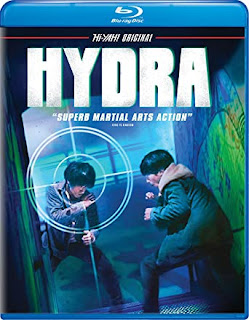 Hydra is the name of a tiny bar owned and operated by Rina (Miu), who inherited it from her father. Takashi (Masanori Mimoto) is her stone-faced cook who keeps to himself and almost never speaks. When he does, it is usually because he’s coerced to.

Later, he comes to Rina’s rescue when a lecherous older man uses a date rape drug to try and have his way with her. Takashi demonstrates considerable fighting skills but doesn’t kill the man. Later, we learn the man was a cop and subsequently killed by a shady organization called the Tokyo Life Group, who Takashi once worked for as their top assassin before quitting to watch over Rina, the daughter of his mentor.

However, Takashi ain’t a bad guy. Neither is Tokyo Life, for that matter, mainly in the business of dispatching a variety of awful people. Convoluted circumstances drag Takashi back into his old job, basically to square against a vagrant mercenary who’s targeting Takashi’s former colleagues and uses Rina to coax him into a fight to the death.

The plot of Hydra is often unnecessarily perplexing, but ultimately inconsequential because what makes the movie a small winner are the main characters and the fight scenes.

The whole “back-for-one-last-job” trope is as old as the hills, but Takashi is pretty likable, despite the stone-cold exterior. In fact, his quietly intimidating demeanor often provides the film’s few moments of levity, while the paternal relationship he has with Rina is charming...and eventually heartwarming.

As martial arts films go, Hydra is actually rather sparse in the action department, but what’s here is amazing and I’ll take quality over quantity every time. There are two major fight sequences, with kicks, flips, punches and knives that come so fast & furious that we might momentarily suspect they were shot in fast-motion. But it’s simply amazing choreography, unembellished by trickery or hyperactive editing.

Running a lean 77 minutes, Hydra hooks us with two engaging main characters, delivers a couple of astounding fight sequences, then gets the hell out before it has a chance to wear out its welcome. With efficiency like that, it’s fairly easy to forgive the murkier story elements.
KITTY CONSENSUS: