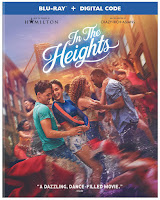 IN THE HEIGHTS on Digital 7/30 and 4K, Blu-ray & DVD 8/31
Lights up on Washington Heights...The scent of a cafecito caliente hangs in the air just outside of the 181st Street subway stop, where a kaleidoscope of dreams rallies this vibrant and tight-knit community. At the intersection of it all is the likeable, magnetic bodega owner Usnavi (Anthony Ramos), who saves every penny from his daily grind as he hopes, imagines and sings about a better life. Experience the cinematic event, where the streets are made of music and little dreams become big, when “In the Heights” arrives for Premium Digital Ownership at home on July 30. The film is directed by Jon M. Chu (“Crazy Rich Asians”) and fuses Lin-Manuel Miranda’s (Broadway’s “Hamilton”) kinetic music and lyrics, starring Anthony Ramos (“A Star is Born,” Broadway’s “Hamilton”) and Corey Hawkins (“Straight Outta Compton,” “BlacKkKlansman”). The film will also be available on 4K, Blu-ray and DVD beginning on August 31.

HARRY POTTER AND THE SORCERER’S STONE ‘MAGICAL MOVIE MODE’ on Digital & Blu-ray 8/17
The 2001 beloved family film Harry Potter and the Sorcerer’s Stone will be released on Digital, Blu-ray and DVD with Magical Movie Mode, a new and exciting way to experience the timeless modern classic.  Magical Movie Mode will be released on August 17 to celebrate the magical adventure film’s 20th anniversary. Magical Movie Mode allows fans the ability to discover ﬁlmmaking secrets, spell incantations, creatures, magical artifacts, trivia, and more in this enchanting collection of fun activities and curiosities.Magical Movie Mode includes director’s commentary from Chris Columbus offering candid insight and amusing anecdotes from the production of the first film, deleted scenes, quizzes testing your potent knowledge of a vast array of topics from the film, graphics and audio during select scenes in the film draw you further into Harry’s world, and much more! 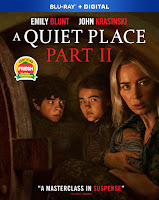 A QUIET PLACE PART II on 4K Ultra HD Combo Pack, Blu-ray and DVD 7/27
Following the deadly events at home, the Abbott family (Emily Blunt, Millicent Simmonds, Noah Jupe) must now face the terrors of the outside world as they continue their fight for survival in silence. Forced to venture into the unknown, they quickly realize that the creatures that hunt by sound are not the only threats that lurk beyond the sand path in this “gripping, edge-of-your-seat thriller” (Scott Mantz, BFCA) written and directed by John Krasinski. The A QUIET PLACE: PART II 4K Ultra HD Combo Pack, Blu-ray and Digital* releases boast exclusive special features that take viewers deeper into the world originated in the global smash hit A Quiet Place.  Follow Krasinski on the set of the new film as he details the cast and crew’s incredible work in a video Director’s Diary; uncover the secrets of the monstrous invaders; dig into the two-film character arc of daughter Regan; watch a breakdown of the unforgettable marina scene; and delve into the extraordinary visual effects and sound design. 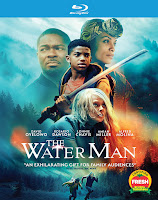 THE WATER MAN on DVD and Blu-ray on August 17th
Gunner (Lonnie Chavis) sets out on a quest to save his ill mother (Rosario Dawson) by searching for a mythic figure who possesses the secret to immortality, the Water Man. After enlisting the help of a mysterious local girl, Jo (Amiah Miller), they journey together into the remote Wild Horse forest -- but the deeper they venture, the stranger and more dangerous the forest becomes. Their only hope for rescue is Gunner’s father (David Oyelowo), who will stop at nothing to find them. THE WATER MAN stars the ensemble cast of David Oyelowo (Selma), Rosario Dawson (Seven Pounds), Lonnie Chavis (“This Is Us”), Amiah Miller (War for the Planet of the Apes), Alfred Molina (Spider-Man 2), and Maria Bello (“NCIS”). The film is the directorial debut of David Oyelowo and is based on the Black List script written by first time feature screenwriter Emma Needell. ShivHans Pictures, Harpo Films and Youba Saxon produced the film with Oyelowo, Carla Giardini, Shivani Rawat and Monica Levinson serving as producers along with executive producers Oprah Winfrey, Darren M Demetre, Connor Flanagan and Needell.
Posted by D.M. Anderson at 11:39 AM