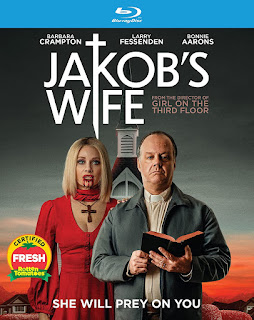 In horror circles, Barbara Crampton needs no introduction. She’s a legendary scream queen, gracing the big and small screen in scores of genre films - good & bad, classic & not-so-classic - for nearly 40 years. She has also aged gracefully and shows no signs of slowing down. But despite her reputation and extensive filmography, it’s surprising how seldom she’s been asked to carry a film herself (as in almost never).

The good news - especially for anyone who grew up worshipping at her altar - is Crampton is almost the whole show here. The better news is that, playing a meek housewife who evolves into an insatiable bloodsucker, she totally nails it.

Jakob’s Wife is aptly titled, since Anne Fedder (Crampton) has mostly existed in the background during her 30 year marriage to Jakob (Larry Fessenden), a self-absorbed pastor who seems barely aware she’s even around. And when she does try to speak, he often cuts her off before she can get a word in. Though obviously unhappy - as demonstrated when an old flame returns to town - Anne has resigned herself to a daily routine of tending to Jakob’s needs.

All that changes when she’s bitten by a monstrous vampire known as The Master (Bonnie Aarons). Not-only does Anne start craving raw meat & blood, she grows stronger, sexier and more uninhibited. More significantly, Anne stops putting up with Jakob’s bullshit. It’s a remarkable, highly amusing transformation, which Crampton plays to the hilt. When Jakob discovers what’s going on - catching her dining on a neighbor in the kitchen - he insists on vanquishing The Master himself, thus freeing Anne. However, Anne is not so sure she wants to be freed.

No stranger to the horror genre himself, Fessenden has his share of funny moments and does a good job making us resent Jakob as much as Anne does. Still, this is definitely the Barbara Crampton show. She makes the most of the opportunity with a performance that’s initially nuanced and affecting before engaging in some prime scenery-chewing. It’s also gotta be said that even though she’s more-than-willing to play her actual age, Crampton still knows how to turn on the sex appeal. Most of us can only dream of looking that good in our 60s.

Though occasionally very bloody, Jakob’s Wife is seldom scary, nor does it really try that hard to be. And as bloodsucking antagonists go, The Master is relatively generic and perfunctory. However, the film is cleverly conceived, with a plenty of black comedy, some narrative surprises and an audacious performance by one of horror’s most luminary ladies.

FEATURETTE - The Making of Jakob’s Wife.