I WOULDN'T BE IN YOUR SHOES: Forgettable But Fun 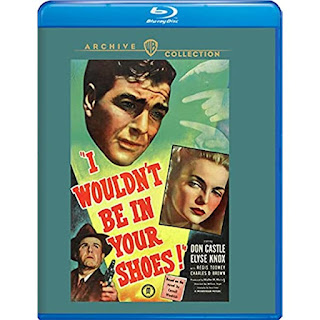 Typical of Monogram Pictures’ Poverty Row quickies, I Wouldn’t Be in Your Shoes has been mostly forgotten over time. Lacking the kind of budget and production values that attract big stars and directors, there’s nothing particularly memorable about the film. Still, this briskly paced, efficiently directed little slab of film noir is a fairly entertaining way to kill 70 minutes. Just don’t go into it expecting another Dark Passage.

The film opens with Tom Quinn (Don Castle) on death row, due to be executed in a few hours. In flashbacks, the man recalls the events leading up to that point. He and Ann Quinn (Elyse Knox) are a down-on-their-luck husband & wife dance team living in a tiny apartment. He’s unemployed, while she makes a few extra bucks as a dance teacher. One night, a frustrated Tom throws his shoes out the window at a howling cat, but when he goes out to retrieve them, they’re gone. The next day, their luck appears to be taking a turn for the better. Not only have his shoes been mysteriously returned to their doorstep, Tom later finds a wallet containing $2000.

Meanwhile, in another nearby apartment, an old man with a shady past has been murdered. The word around the neighborhood is that he had thousands of dollars stashed in his place. Later, the police match an imprint with one of Tom’s shoes, then identify bills spent by the couple as belonging to the victim. Tom is arrested, convicted and sentenced to die, though Ann insists he’s innocent. She implores Inspector Judd (Regis Toomey) to help her find the real killer. Since he’s somewhat enamored with her, she offers to marry him if he can prove Tom’s innocence.

While the performances are perfunctory, Tom & Ann are likable enough to keep us invested in their predicament. Direction by journeyman William Nigh never rises above proficient, but he keeps things moving along with little muss or fuss, which tends to gloss over some lapses in plausibility. Though no one’s gonna walk away thinking I Wouldn’t be in Your Shoes is a lost classic, it’s never boring, wasting none of its brief running time with superfluous details. Anchored by a nifty twist ending, this is an enjoyable second-tier film-noir.