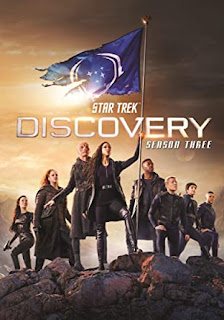 Sending an existing Star Trek crew 900 years into the future - with no apparent hope of returning to their own time - is one of the more interesting creative decisions made for the franchise in a long time.

This jump to the 32nd Century actually happened at the end of Season Two. Season Three begins after they’ve arrived. New viewers might initially be perplexed, since the obligatory recap just sticks to the basics: Discovery’s jump to the future saved all of civilization, it’s a one-way trip and the ship has been gifted with a “spore drive,” allowing it to instantaneously jump from one destination to another. Most of the other particulars about Season Two’s story are only hinted at.

But ultimately, it’s all the info anyone new to the party really needs, since this one features a different story arc and mostly new subplots. One of the franchise’s strengths was always establishing diverse, dynamic characters and repeatedly reminding us of what makes them endearing. Hence, we quickly learn returning characters’ various idiosyncrasies while being introduced to interesting new ones (such as Book, a Han Solo-like pilot played by David Ajala). Speaking of the latter, it’s safe to say that Discovery is now the most inclusive show in the series - maybe in all of television - with a cast of characters so diverse they make the crew of the original series look like the Republican senate. One would be hard-pressed to think of a race, age group, class, gender or sexual orientation that isn’t respectfully represented by a major character, which would undoubtedly make Gene Roddenberry proud.

Currently, the Federation is in shambles, a shadow of its former self following a catastrophic event known as The Burn, which destroyed most of the dilithium in the galaxy. Without it, warp speed isn’t possible. Season 13 consists of two major story arcs. First is Discovery’s search for Federation headquarters, which is no longer located on Earth (Which has broken from theFederation). When they do find it, the crew is in awe of the advancement in technology. However, Discovery’s spore drive means it’s the only ship that doesn’t require dilithium, meaning the ship and crew are immediately vital to Starfleet. This leads to the second main story: Trying to determine what caused The Burn in the first place, which recently-demoted science officer Michael Burnham (Sonequa Martin-Green) believes holds the key to restoring the Federation to its former greatness.

However, not everyone they encounter loves or trusts the Federation, including some planets that were once part of it, such as Ni’Var (a Vulcan-Romulan alliance). Additionally, they aren’t the only big fish in the pond. The Emerald Chain is a brutal slave-based syndicate headed by Osyraa (Janet Kidder), a tyrant who not-only despises the Federation, she sets her sights on grabbing Discovery’s spore drive for her own use.

Interspersed among these 13 episodes are various subplots, some which are cerebral and idea-driven, others which consist of balls-out action more akin to Star Wars. With a plodding exception or two, these side stories are very entertaining, many of which either introduce new characters and delve deeper into existing ones, such as the two-parter featuring Philippa Georgiou (Michelle Yoah). Fans might recall she’s not the commander from previous seasons, but the displaced power-mad emperor from a hostile parallel universe who has somehow endeared herself to this crew (though she professes to despise them).

But the intricate, interwoven narratives would be meaningless without good characters, smart writing and - above all - a willingness to provide closure, all of which Season Three provides in abundance. One of this writer’s biggest turn-offs about serialized TV is the dreaded season-ending cliffhanger. However, aside from a few lingering threads, all of these storylines are brought to satisfying conclusions. With its unique-for-the-franchise setting and a growing cast of ever-evolving characters, Season Three is a terrific stand-alone binge-a-thon.