WRATH OF MAN: Jason vs. Everybody 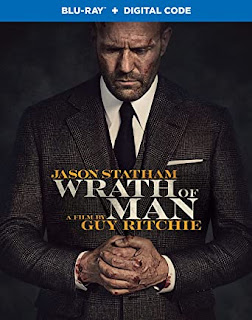 Review by Tiger the Terrible

In many ways, Jason Statham’s career is remarkably similar to ‘70s-era Charles Bronson’s. With a few notable exceptions, his films aren’t blockbusters, nor are many of them particularly memorable. And I think even the staunchest fan would have to concede Statham ain’t gifted with much range.

Yet at the same time - again, with a few notable exceptions - his filmography isn't loaded with pooches, something you can’t say about Stallone or Willis (not with a straight face, anyway). With most of them created as showcases for Statham’s badassery, at least you know what you’re gonna get. Besides, it’s fun watching Jason Statham be Jason Statham.

Though Wrath of Man marks the fourth collaboration between Statham and director Guy Ritchie, making a big deal out of this reunion is sort-of pointless. The film is definitely no Lock, Stock and Two Smoking Barrels, nor does it try to be. Aside from a few early attempts at levity, the overall serious tone and emphasis on kinetic action - along with plenty of grim violence - makes it more reminiscent of Heat and The Town.

That isn’t necessarily a bad thing. Who doesn’t love a good heist flick?

The film opens with an armored truck heist which results with the deaths of the driver and guards. Months later, Patrick Hill (Statham) is hired by the same company. Though initially underestimated by his new colleagues, Hill turns out to be massively overqualified for the job, as demonstrated when he single-handedly thwarts a robbery, dispatching a half-dozen perps along the way.

But Hill isn’t quite who he seems and the opening heist is actually the crux of the entire narrative. The middle act is a series of Rashomon-style flashbacks that revisit the robbery - as well as circumstances surrounding it - from different perspectives. Not-only do these flashbacks reveal the crew responsible, but Hill's real identity and his profound interest in the incident. If the film’s title wasn’t already a dead giveaway, he has damn good motivation for thwarting the crew’s next job and dishing-out bloody payback.

Despite some clunky, eye-rolling dialogue and a few predictable plot conventions (of course there’s an inside man), Wrath of Man is fast-paced, engaging and anchored by well-executed action sequences. In particular, the final act, while not entirely plausible - body armor doesn't make you Superman - is exciting, bloody and comes to a satisfying conclusion.

Statham is his usual stoic self, though he engages in less close-quarters action than we’re used to, content to solve most problems with guns rather than his considerable physical skills. He is supported by a strong cast, including Scott Eastwood, surprisingly convincing as the most cold-blooded member of the heist crew, and Holt McCallany, always a woefully under-appreciated character actor.

Ultimately, Wrath of Man more-resembles Jason Statham’s overall body of work than Guy Ritchie’s (though it is the director’s best film in ten years). There’s nothing about the film that resonates much afterwards, but it’s stylishly made and a lot of fun in the moment, with a solid story boosted by taut action and a sizable body count. I think Bronson would approve.