THE CARNIVORES: Oh, No! Not the Dog! 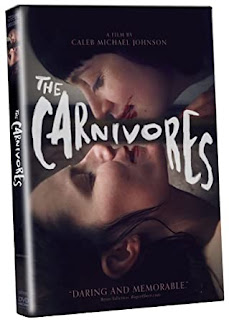 Depending on how you feel about dogs, Alice (Tallie Medel) might be the most despicable villain in movie history. Harvie, the beloved pooch belonging to her partner, Bret (Linsday Burdge), is dying. Trusted to take him to yet-another vet visit, Alice declines an expensive procedure that has a chance of extending his life another year. She abandons him in a park and drives away, only to change her mind and bring him back home. Finally, after she intentionally leaves the backyard gate open, Harvie disappears for good.

All this happens within the first thirty minutes.

However, there’s a small part of us that just might empathize with her. She feels neglected, and Harvie’s declining health is not just taking a financial toll, but an emotional one. Bret’s love for the dog borders on obsession, exacerbated when he goes missing. There’s even a moment - after Alice refuses to get clients from work involved - Bret somewhat cruelly points-out the dog has been part of her life longer than Alice has.

But The Carnivores isn’t about the search for a missing dog. In fact, the film suggests he might already be dead (and may not have passed-away peacefully). Harvie’s merely the catalyst for Alice & Bret’s dark descent into obsession and madness. Bret forsakes everything to drive city streets in search of the dog, sometimes all night, without regard to her personal safety and even abandoning her own job.

Conversely, Alice, a self-loathing, chronic sleepwalker with a strange fixation on raw meat, is both frustrated with Bret’s lack of intimacy and terrified of losing her. She’s also increasingly racked with guilt over Harvie’s fate. When the narrative focuses on her overall anxiety and increasingly strange behavior, the narrative sometimes has us entertaining the ominous notion that Alice may have eaten him.

So far, The Carnivores is the strangest thing I’ve reviewed this year. And considering I just endured Abel Ferrara’s latest film, that’s really saying something. While not really a horror movie, it certainly develops the tone of one, growing increasingly surreal - almost dreamlike - particularly during the ambiguous final act. However, the bizarre atmosphere isn’t gratuitous; it establishes Alice’s fractured state-of-mind. And since this is primarily her story - from her perspective - it only makes sense that the viewer is similarly distressed.

The Carnivores isn’t what anyone would call a fun film - Alice’s goofy co-worker provides the only levity - and one’s enjoyment certainly depends on their tolerance for the company of characters created to make them feel increasingly uncomfortable. However, the main characters are morbidly interesting (performed with conviction by Medel and Burdge). Their behavior and actions may even be tenuously relatable to some viewers, though I suspect many will never be able to forgive Alice.

DIY SXSW SCREENING - This is a photo gallery. Looks like the movie was screened in an office break room.

ALTERNATE ENDING - They should have gone with this one. It’s a little more disturbing.

The movie was OK I liked it.