SEANCE and the Chatty Cathy 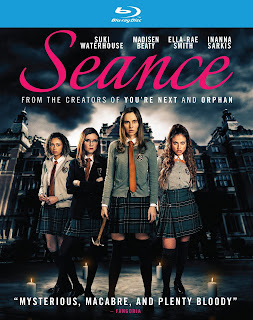 The late, great Roger Ebert coined the “Fallacy of the Talking Killer,” a time-honored trope where the villain has the hero trapped or cornered and all he has to do is shoot him. Instead, he takes the time to either explain his nefarious plans in detail, or point-out where the hero screwed up. This gives the hero ample opportunity to plot his escape or be rescued by a sidekick.

Seance features a doozy of a talking killer, spending a good portion of the final act explaining the previous 75 minutes. And despite the title, it’s more of a slasher film than a ghost story.

At a private girls school, several students led by mean-spirited Alice (Inanna Sarkis) “summon” the Edelvine Ghost, a former student who died at school and allegedly haunts the halls. Their ritual is actually a ruse to scare classmate Kerrie, but she ends up dying in her dorm, leaving only cryptic clues as to what happened. Then a new student, Camille (Suki Waterhouse), is admitted and quickly earns the wrath of Alice’s clique (mainly because she doesn’t put up with their shit).

But later, Alice talks everybody - including Camille - into conducting a seance to contact Kerrie, hoping to learn what killed her. Instead, whoever they summoned tells them they’ll be next. And sure enough, schoolgirls start dropping like flies, meeting untimely deaths in a variety of nasty ways. It might be the work of the Edelvine Ghost, but the girls are made to suspect Camille.

For the most part, Seance walks a familiar path, right down to the characters. Though earnestly performed, we’ve seen the outcast protagonist versus the bullying bitches in countless films since Carrie. Still, writer-director Simon Barrett does a decent job putting them through the paces, including some well-staged death scenes. The revelation during the final act is kind-of underwhelming, since once everything is explained - at-length! - the story loses some of its plausibility.

However, Seance does come to a lively - and gory - conclusion, which helps us forgive lapses in credibility. The rest is unremarkable slasher horror, though slickly-made and certainly watchable. If only the killer knew when to shut up...not everything needs to be explained, especially to the one person who can stop you.

FEATURETTES - “Behind the Scenes of Seance”; “Decapitation Pre-Viz”