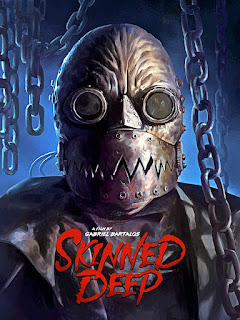 I’ll give Skinned Deep props for one thing...the mask worn by “Surgeon General” (the most homicidal member of a psychotic backwoods family) is one of the coolest I’ve ever seen in a horror film. With black goggles and a bear-trap jaw, he looks like a monstrous version of the Iron Giant.

If it was available as a Halloween mask, I'd scare the living shit out of every kid in the neighborhood.

There’s demented imagination behind all the antagonists, including “Plates” (Warwick Davis), a pasty-white dwarf whose weapon-of-choice is fine china, and “Brain” (Jason Dugre), with his horrifically huge head. Then there’s the muscle-bound maniac who has no actual head. Finally, we have family matriarch Granny (Liz Little)...outwardly kind while directing her boys to commit a variety of atrocities on tourists and strangers.

Skinned Deep is the brainchild of writer-director Gabe Bartalos, mostly known for doing make-up & special effects on various low budget films - including a few cult classics - for over 30 years. Hence, his directorial debut - released in 2004 - is full of bizarre, grungy production design, outlandish violence, gushing gore and freaky faces. While the film’s visuals reflect a pretty low budget, it’s obvious every dollar Bartalos was able to scrape together is up on there on the screen.

He sure didn’t spend much on casting, though. With the exception of Davis, the performances are uniformly awful - like, high school theater awful - undermining the frequent stabs at black humor. And while there’s a considerable amount of visual creativity, Bartalos demonstrates that writing is not one of his strengths. Not only is the dialogue often cringeworthy - sometimes laughably pretentious - what begins as a Texas Chainsaw Massacre rip-off quickly dives head-first into deliberate campiness more akin to TCM Part 2. Later, some truly-bonkers sci-fi elements are inexplicably thrown into the mix without any previous context or foreshadowing.

Skinned Deep ends up as a hodgepodge of tenuously-connected sequences, like the director had a lot of cool individual scenes in-mind, then built a story around them. But that ain’t necessarily a deal-breaker, since the budget-conscious make-up and SFX keep things from becoming dull. Just don’t expect much in the way of originality, decent performances or a well-structured narrative.