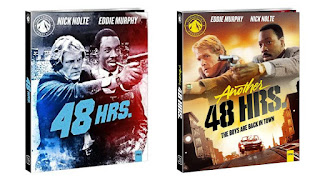 One film is an action-comedy classic that made Eddie Murphy an instant star. The other is a cynical corporate product that should never have been made and emblematic of that same star’s sad descent into mediocrity. As such, both films are interesting additions to the Paramount Presents series, with 48 HRS getting a decent upgrade and Another 48 HRS on Blu-ray for the first time.

48 HRS is not the first so-called “buddy” action-comedy - 1974’s Freedie and the Bean arguably holds that title - but it’s definitely the most influential. Of course, Jack Cates (Nick Nolte) and Reggie Hammond (Murphy) aren’t quite buddies, but the quasi-antagonistic relationship between the two became a working blueprint for a slew other films which dished-out equal amounts of wisecracks and gunplay.

It’s aged better than most, as well, retaining a considerable amount of the grittiness director Walter Hill made his name with in such films as The Driver, Southern Comfort and Hard Times. Another reason the film still holds up are the characters. Cates and Hammond feel real, not mere extensions of the actors playing them, which also applies to the secondary characters. The cops are regular guys, jaded and weary, while the criminals are low-life scumbags and none-to-bright.

But of course, the main reason 48 HRS works so well is the chemistry between Nolte and Murphy. While Murphy, in his film debut, makes the most of the opportunity - the redneck bar scene may be the funniest thing he’s ever done - Nolte holds his own, playing-off his co-star with gruff, foul-mouthed charm.

So just what the hell happened in the eight years leading up to the dumpster fire that is Another 48 HRS? With the same stars and director returning, one would think, at the very least, the sequel would be an enjoyable re-hash. It’s a re-hash, alright, but bigger, louder and utterly joyless. An embarrassingly anemic attempt to top the first film’s classic bar scene is indicative of its laziness. Not only is the film almost never funny, it seldom even tries to be. Nolte slips comfortably back into his role, but Murphy seems to have forgotten - or considering what was paid this time, didn’t care - what made Reggie so endearing in the first place.

There’s also a much greater emphasis on hyper-edited action, head-pounding gunplay and a ridiculous amount of broken glass, much of the mayhem lovingly depicted in slow motion. Not only that, the whole biker-assassins plotline - with bad guys who look and act like Klingons on Harleys - smacks of an attempt to create aesthetically cool antagonists rather than give them actual personalities. That might be fine for a lunkheaded Stallone film, but the antithesis of what made the original at-least plausible. Worst of all, the whole thing feels rushed, with plot holes nobody bothered to fill and a bonehead red herring that - when you think about it - makes no sense when both films are taken into context.

But from a historical perspective, watching them back-to-back today is an interesting experience. The first film is a modern classic, a rough-&-tumble action-comedy with taut direction, sharp dialogue and earnest performances that took everyone by surprise. It also set Eddie Murphy on the road to superstardom. The second simply takes advantage of audience goodwill for the sake of another big payday, with Murphy taking home the biggest check with minimal effort (indicative of his work through much of the next decade).

This dichotomy provides the perfect lesson for what happens when accountants, egos and laziness take over the creative process. You'd be hard-pressed to find a more jarring difference between a film and its sequel.

FILMMAKER FOCUS - Continuation of the same interview with director Walter Hill, focusing primarily on this film. He chooses his words more carefully this time. 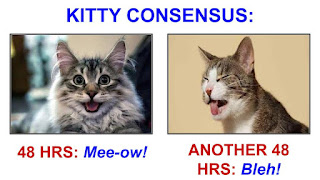