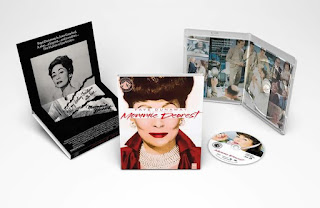 Whether she wants to admit it or not, Faye Dunaway’s legacy is likely gonna be defined by three films...Bonnie & Clyde, Chinatown and Mommie Dearest. While the first one made her a star and the second cemented her greatness, the last one arguably had the biggest impact on her career, both positively and negatively.

Though certainly a big hit at the time, Mommie Dearest was critically reviled and considered by some to be an even bigger hatchet job on the late Joan Crawford than the book it was based on. That, coupled with quotably-laughable dialogue & Dunaway’s histrionic performance - both which undermined the overall serious tone - gave the film a trainwreck quality that was almost immediately embraced in cult circles. Even Paramount itself started playing-up the campier aspects in subsequent ad campaigns.

Dunaway’s portrayal of Crawford ended up being as iconic as Bonnie Parker, though for more dubious reasons, exacerbated by the irony of a notoriously-difficult star being played by someone with a similar reputation. Her career never fully recovered, either. After Mommie Dearest, her days as a bankable leading lady were essentially over.

At this point, 40 years later, any critical re-evaluation of Mommie Dearest seems pointless and redundant. Those who found it ugly, overwrought and disjointed back in ‘81 will never change their minds. Conversely, those who laughed, shouted back at the screen and revelled in its excesses will still find a lot to love. There’s never been much middle ground. One thing is certain...love it or hate it, few have ever been truly bored by it.

Which means, of course, that Mommie Dearest is a fitting choice for inclusion in the Paramount Present series. Just because it’s legendary for all the wrong reasons doesn’t make it less legendary. Nicely remastered for Blu-ray, the film comes with a smattering of new & archival bonus features, most of which focus on its legacy as a camp classic (though Ms. Dunaway's conspicuous absence underscores her ongoing dismissal of the film). For those who’ve always embraced the badness - or anyone merely curious - it’s a disc well-worth checking out.