TENTACLES and the Marquee Mishap 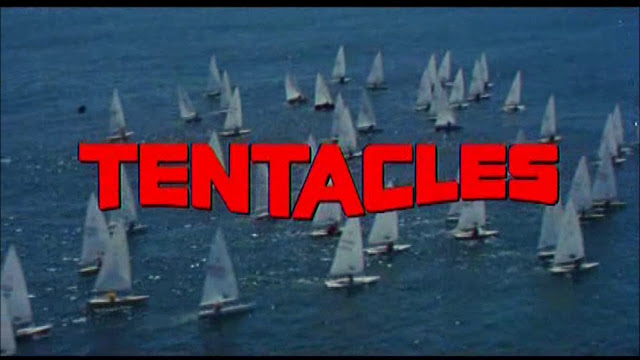 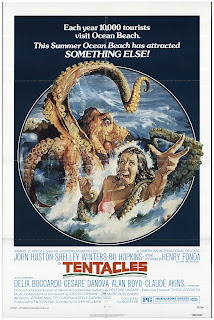 In the wake of Jaws, I fell in love with horror movies featuring killer critters. Being in my early teens with fairly undiscriminating tastes, I was eager to take-in anything, good or bad (mostly bad), that had tasty tourists, scrumptious swimmers or crunchy campers on the menu.

And filmmakers worldwide were more than happy to indulge me with a slew of Jaws knock-offs. If an animal had teeth or claws, chances are someone made a horror movie about it, whether or not the belligerent beastie was actually carnivorous. Bears, alligators, frogs, bees, spiders, snakes, rats, chickens, cockroaches, worms - even rabbits - were prime horror fodder and I was fortunate enough to live within biking distance of the Southgate Quad to catch a lot of ‘em.

One film that didn’t find its way to the Southgate - even as a co-feature, when we often got two movies for our two-bits - was Tentacles, which oozed out of Italy in 1977. Back then, there was nary a popular movie or genre that such opportunistic auteurs as Lucio Fulci, Bruno Mattai and Joe D’Amato couldn’t crank out faster & cheaper. Tentacles was directed by one of Italy’s more savvy rip-off artists, Ovidio G. Assonitis (aka Oliver Hellman), who’d recently achieved a considerable amount of dubious fame with Beyond the Door, so derivative of The Exorcist that Warner Brothers filed a copyright infringement lawsuit.

Naturally, Tentacles is about a killer octopus, a logical choice for a nature-run-amok movie. Today, we know octopuses are intelligent, relatively docile, curious...even friendly and personable. And as recently presented in the charming documentary My Octopus Teacher, they are capable of triggering the waterworks. But because of their alien appearance, they’re just-as-often Hollywood’s go-to deep-sea death machines - massive, mean and scary-as-fuck - attacking divers, ships and submarines without provocation.

Tentacles’ malevolent mollusk attacks and sucks-dry a variety of folks off the coast of Solana Beach, a scenic resort town (I guess its regular diet of lobster and fish ain’t cuttin’ it anymore). Hellman Assonitis ain’t messing around, either. Two people are killed within the first ten minutes, one of them an infant in a stroller! Nosey reporter Ned Turner (John Huston) suspects something monstrous in the water, while Sheriff Robards (Claude Akins) wants to keep a lid on the story. But this octopus must evidently have the metabolism of a hummingbird because it ends up killing more people than John Wick.

It turns out the octopus is pissed over an underwater tunnel being built by Trojan, a company run by Mr. Whitehead, played by none-other than Henry Fonda, who literally phones-in most of his performance and apparently did all his scenes in one day. Around this time, Fonda did a lot of paycheck pictures, lending his name - and minimal effort - to a slew of cheapies in exchange for prominent billing, boosting the marquee value of such cinema suppositories as Meteor, The Swarm, City on Fire, The Greatest Battle and Wanda Nevada. Nice work if you can get it.

At least paychecks are a legitimate excuse to tarnish your legacy (just ask Bruce Willis). But what are we to make of John Huston? Surely he was still living high off the residuals from the movies he made with Humphrey Bogart alone. But even setting aside one of the most impressive directorial filmographies in history - and he was still helming good movies in the ‘70s - the guy had just-previously acted in Chinatown and The Wind and the Lion. Just what the fuck prompted him to share top billing with Bo Hopkins (who never had a legacy worth tarnishing) in a cheap knock-off loaded with laughable dialogue (“This one’s tasted blood”), cut-rate special effects, stock footage and Shelley Winters? 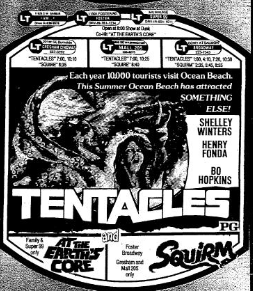 But I wasn’t asking these questions in 1977. Even if I did know who the hell John Huston was, I didn’t have the opportunity because the only nearby theater showing Tentacles was the Super 99 Drive-In, which was within similar biking distance, though trying to hang a speaker from my handlebars would be a tall order. I asked my folks to take me, but was met with a swift “no.” Begging them to drive me across town to catch Star Wars was one thing, sitting in the car for an exploitation picture was another, especially with the film’s sudden, unexpected title change.

It was common practice for a variety of crafty distributors to change the titles of films they acquired, sometimes to make a European import more enticing to American audiences, but just-as-often to market an older movie as something brand new, duping filmgoers with a sexy new ad campaign. However, Tentacles’ title change for its run at the Super 99 was likely made by the theater management themselves, either accidentally or as a prank...

...because in the summer of 1977, a film called ‘Testicles’ premiered there.

I noticed it when the family was out running errands and we made a quick stop at the Burger King located across the street from the theater. The weathered marquee displayed the new & improved title with big black letters, the second ‘S’ slightly askew. “Hey, look,” I said, pointing across the street from our booth by the window. “Testicles!”  Mom and Dad looked over, eventually erupting into laughter once the unfortunate error in diction registered with them.

I suppose it could have been a prank, possibly pulled by an employee because the average Joe isn’t likely to keep their own cache of marquee letters on-hand for such opportunities. But not-only was ‘Testicles’ plastered on both sides of the marquee, it remained that way for the entire two weeks of the film’s run. So if it wasn’t a prank, it means not a single employee noticed.

There’s a lesson here. It always pays to proofread, and not just for spelling. Technically, whoever was in charge of the marquee at the Super 99 didn’t spell anything wrong. But even today’s built-in spell-checkers armed with auto-correct wouldn’t have caught the mistake. I’m a middle school teacher in the real world, and one year a kid turned in an expository essay about a foreign country. In describing its currency, I’m pretty sure he meant to write something like ‘pences,’ but ended up spelling ‘penises,' which of course, his spell-checker was fine with. Hence, he informed me that the cost for a loaf of bread in this country was five penises. That’s a pretty steep fucking price. And even if I was willing to sacrifice Dave Jr. to satisfy a sudden PB&J craving, where the hell would I find four more penises?

Computers are wonderful tools, kids, but they can’t do all the work for you. Put the Nintendo controller down for five minutes and, for your sake, give the paper a quick once-over.

Getting back to 1977...one afternoon during the film’s run, I pedaled down to the Super 99 with my friend, Mark, armed with Dad's trusty Polaroid to take a few pictures of the marquee for posterity. ‘Testicles’ became something of a running gag most of that summer, with either me or Mark imitating the ominous voice-over that the late, great Percy Rodriguez provided for Tentacles’ trailer.

As school reconvened in the fall, when our 8th grade social studies teacher asked the class what we did with our summer, Mark loudly & proudly declared with a shit-eating grin, “I went to the drive-in to watch ‘Testicles’!” I could tell it was one of those awkward teacher moments where a kid says something so off-the-wall that you aren’t immediately sure how to react. Even though I was the only one in class who knew the context, the whole class erupted at the mere mention of testicles.

But, alas, I never actually got to see ‘Testicles’ or Tentacles until it aired on TV a year or two later. On the big ladder of animal-attack flicks, it definitely belongs on one of the lower rungs. Despite the body count and unintentionally amusing moments of mollusk-instigated mayhem, the movie is relentlessly talky and ultimately kind-of boring. Perhaps the film would have been more entertaining if it really were about testicles. Woody Allen once made a movie featuring a giant killer tit, so why not? It might be fun to see a cast of stock characters getting teabagged by an industrial-sized set o’ gonads.

One of my few regrets is that I never hung onto the Polaroid picture I took of Super 99’s faux pas. I’ve never seen a more amusing movie marquee mistake.