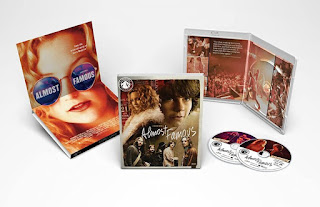 What a difference 21 years make, even for movies that were period pieces to begin with.

Released in 2000, Cameron Crowe’s Almost Famous was both a semi-autobiography and love letter to a bygone era. Nearly every scene - as well as the dozens of classic songs used in the soundtrack - harkened back to a time when music inspired awe in those who loved & worshipped its creators. According to the late Lester Bangs  - played in the film by Philip Seymour Hoffman - the early ‘70s were also the last gasp of rock as an art form, before it became a cynical product.

One gets the impression Crowe feels the same way. In 2000, music was still big business, but its heart & soul were gone. Setting-aside the autobiographical aspects of the story, there’s a sense of loss permeating the film. Not just the loss of innocence of its main character, William Miller (Patrick Fugit), but of the budding young rockers he's writing an article about, Stillwater. As the film draws to a close, the band, led by idiosyncratic guitarist Russell Hammond (Billy Crudup), is still creative & idealistic, but on the verge of being swallowed up by the corporate machine.

We’re now almost five decades removed from the era Almost Famous takes place. Music itself no longer has any tangible value. Few people are still willing to pay for it and even fewer can earn a living creating it. YouTubers and game show contestants are the new rock stars. Think about it...when was the last time someone found fame playing a guitar?

And rock journalism? Forget about it. Such iconic rags as Hit Parader, Circus and Creem went the way of the Dodo years ago. Even the mighty Rolling Stone - the catalyst for Miller’s long, strange trip - is a brand-name shadow of its former self. Journalists no longer follow bands on the road because fans can simply follow them on Twitter.

Today, there’s virtually no aspect of Almost Famous that exists anymore, nor is any of it likely to again. If anything, that renders the film even more poignant than it was 21 years ago, especially for anyone old enough to fondly remember whenever the Allman Brothers blew into town (much of the story draws from Crowe’s experience covering that band on tour).

Though Almost Famous has itself become a piece of nostalgia, it nevertheless remains a terrific film. Filled with authentic, affecting performances and stuffed with great music (both new and classic), it’s arguably Crowe’s best work, probably because it’s his most personal. Though fictionalized, few films have captured an era’s musical climate and culture quite as accurately. For a couple of hours, we’re not only engaged in Miller’s unlikely story, but convinced that the ‘70s was the best decade to come-of-age.

Almost Famous has been released on Blu-ray before, but has now been nicely remastered and features some new bells & whistles to go with the wealth of vintage bonus features carried-over from previous releases. Additionally, the extended “Bootleg Cut” is once-again included on a separate disc (though the additional 20 minutes don’t really make it a better film). Regardless of one’s opinion of the movie, this is easily the most comprehensive release in the Paramount Presents series to-date.

AUDIO COMMENTARY - By Cameron Crowe and some friends & colleagues, including his Mom!