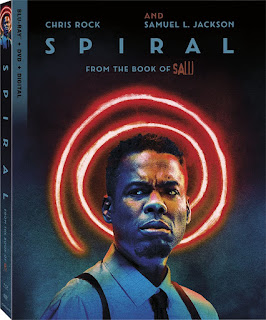 One big reason I’ve enjoyed all the Saw movies is I always kept my expectations in check. That's actually good advice regarding any horror franchise, especially those which threaten to extend into the double digits.

The original Saw was gruesomely entertaining, not just as a horror film, but a suspenseful detective story with a pretty decent twist ending. Of course, anyone who’s seen all the sequels can attest there's an increasing emphasis on implausibly-elaborate traps, gonzo gore and attempts to top the original’s twist-laden narrative. None of them would ever be mistaken for high art, but it’s hard to argue they don’t deliver exactly as-promised.

That being said, Spiral - the ninth film in the series - actually exceeded my expectations. The prerequisite outlandish traps and uninhibited violence are back, a good example being the wince-inducing opening sequence involving a subway train and a victim’s tongue. However, there is a greater emphasis on the police procedural aspects of the story, perhaps even more so than the original film. There might even be some relevant social commentary to be found here.

Though Jigsaw himself is long-dead, someone begins committing a series of similar murders, while sending Zeke gruesome packages with cryptic clues to their locations. However, the killer’s M.O. is slightly different, in that he/she is targeting cops...more specifically, bad or corrupt cops, which Zeke’s department appears to be full of.

One aspect that tarnished some of the sequels was the increasing number of victims who had no past sins to answer for (they simply got in the way). Here, we at-least understand why these cops are targeted. And depending on one’s point-of-view, some of them have it coming. Whether or not any kind of commentary about our tumultuous cultural climate is intentional, it’s certainly there if you’re looking for it.

The narrative is full of the usual plot twists and red herrings, but it’s efficiently-paced and fairly engaging, with a more coherent, self-contained story that doesn’t require a slide rule to follow (another common knock against some of the sequels). Though Rock occasionally seems out of his element, he turns in a decent performance and injects welcome moments of humor here and there, something completely absent from every previous film.

As the end credits roll, it’s unlikely anyone will walk away thinking they’ve just seen a great film, but equally unlikely fans of the series will be disappointed. Spiral is audacious enough to sate the gorehounds & thrillseekers, while bringing back the detective story elements many have missed since the original film.

THE CONSEQUENCES OF YOUR ACTIONS: CREATING SPIRAL - An hour-long, 5-part documentary.