MIDNIGHT IN THE SWITCHGRASS and a Loss of Faith 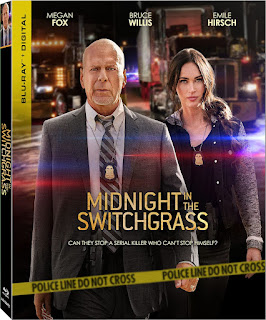 I used to be a big Bruce Willis fan, even enjoying some of his less revered films (such as The Jackal...not a masterpiece, but a lot of fun). Although his lengthy resume has always been wildly inconsistent - to say the least - at least we had the impression he gave a damn.

But with a few notable exceptions, the last decade has been one direct-to-video clunker after another, his roles consisting of glorified cameos in exchange for a paycheck and prominent billing. Say what you will about John Travolta’s recent career...at-least he’s the actual star of the movies he sells his name to. As much as it pains me to say, I just don’t trust Bruce anymore.

With Willis given second billing for Midnight in the Switchgrass, my first thought was...uh-huh. Sure enough, he has maybe 15 total minutes of screen time. Not only that, his character is 100% inconsequential to the plot. As the aging partner to ambitious FBI agent Rebecca Lombarti (Megan Fox), his character’s sole purpose is to act exasperated by her recklessness (and doing a piss-poor job at it, I might add).

Fox and Emile Hirsch (playing local cop Bryan Crawford) are the actual stars, teaming up to track down a truck-driving serial killer (Lukas Haas), who's something of a zealot that preys on wayward young girls. Haas was always kinda creepy, even as a child actor. Here, playing a middle-aged family man with a dark secret, he’s downright disturbing. Attacking his role with gusto, Haas delivers a cheerfully chilling performance.

He deserves better, though, because when he’s not creeping us out on-screen, Midnight in the Switchgrass is a rote checklist of familiar conventions, not helped by bland direction, generic writing and superficial attempts at characterization (such as the case’s strain on Crawford’s marriage, a subplot that’s touched-on but quickly dropped). The novelty of Fox sharing a few scenes with real-life boy-toy Machine Gun Kelly (in an uncredited cameo) might amuse the tabloid crowd, but neither she nor Hirsch can do much to save the film from mediocrity.

But at least they appear to be trying. In the handful of scenes he appears in, Willis makes his indifference painfully obvious with a performance so lackadaisical that it’s actually a distraction. Worse yet, he gives the impression he’s doing everyone a favor just by showing up. Instead, his appearance is a sad reminder that Midnight in the Switchgrass is little more than derivative video fodder. Sorry, Bruce, but I've lost all faith in you.

MEH. LIKE SHARING THE BED WITH THE DOG.
Posted by D.M. Anderson at 3:56 PM