Go Coach on Your FLIGHT TO MARS 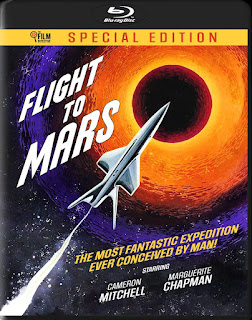 “Welcome to Mars, ladies and gentlemen, where the men look like partners in a law firm and the women have legs like Betty Grable. Enjoy your stay, but please don’t touch anything because the sets might topple over.”

Sci-fi cinema was just getting into high gear when Poverty Row studio Monogram Pictures put out Flight to Mars, with a budget so low that Cameron Mitchell earned top billing. But even though this ain’t exactly a George Pal production and its depiction of what awaits us on the angry red planet was probably chuckleworthy even in the ‘50s, it’s a fun little film.

On the first mission to Mars, a five person crew - including intrepid wise-cracking reporter Steve Abbott (Mitchell) - crash lands. They meet its leaders, who are outwardly congenial and offer to help repair the ship. But in reality, their society is dying and they plan on using the ship to create their own fleet and conquer Earth. A gratuitous romantic subplot is also introduced, mostly an excuse to exploit Marguerite Chapman’s considerable visual assets...mee-ow!

Speaking of visuals...considering the budget, the film features some interesting special effects. The scenes of the rocket in-flight are goofy as hell, but the underground Martian city - a combination of forced perspective, matte paintings and colorful set design - is pretty impressive, drawing obvious inspiration from the 1939 British classic, Things to Come.

Today, Flight to Mars is mostly of historical interest. Aside from being one of the earliest sci-fi films to depict a voyage to Mars, it’s also one of the earliest produced by Walter Mirisch. Back then, he was an eager young man trying to break into the business. Later, Mirisch was not-only instrumental in Monogram Pictures’ evolution into Allied Artists, he’d go on to produce some of the most beloved films of the 1960s. And as of this writing, I’m happy to report Mr. Mirisch is still alive and kicking!

Appropriately, the supplements included here focus mostly on the movie’s place in cinema sci-fi history, as well as its legendary producer. Like a lot of oddball relics rescued from obscurity by The Film Detective, the bonus features are arguably more engaging than the movie itself, which has been beautifully restored.

SUPPLEMENTARY BOOKLET - Features an essay, “Mars at the Movies,” by Don Stradley