The 4K Resurrection of DEAD & BURIED 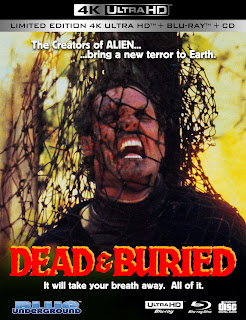 For me, Dead & Buried has always been a freaky little movie. Hell, I couldn’t even finish it back when I was a teenager, despite numerous opportunities HBO gave me. Most of the time, I never made it past an early scene where “nurse” Lisa (Lisa Blount) drives a six-inch hypodermic needle through the eye of a man she and local townies had previously set on fire. While I did develop something of a crush on the lovely Ms. Blount (RIP), the movie itself was just a bit more than I could take.

But why? I’d seen plenty of scarier movies before, such as The Exorcist and Halloween. And compared to the non-stop visceral nastiness of Dawn of the Dead, the violence on display in Dead & Buried, while potent, wasn’t anything I couldn’t handle. Perhaps part of it was due to the extent of that first victim's suffering at the hands of a seemingly sadistic mob, who took pictures while he screamed and burned. Or maybe it was the suffocating tone and atmosphere established in the very first scene, as bleak as the perpetually gray skies over Potter’s Bluff (the coastal town of the setting). Whatever the case, it was obvious the movie was shaping up to be atypical of the sensationalistic funhouse horrors I was used to, and more than I wanted to deal with at the time.

Of course, I eventually manned-up and saw it through, mainly because it was one of those films ignored in theaters but earned a belated cult following, its reputation as a dark, brutal and highly-original horror film growing over the years. Dead & Buried turned out to be intriguingly disturbing without resorting to cheap shocks, gory without being exploitative, atmospheric but never flashy, deliberately-paced but never boring. Certainly not always a fun film, it was nevertheless unique for its time.

The basic story is sort-of an unholy marriage between Frankenstein and a zombie movie, with some Cronenberg-style body horror as its mistress on the side. James Farentino plays the sheriff of a small coastal town investigating a series of brutal murders, mostly strangers. However, not-only do the victims turn up later, seemingly alive and well, they’ve assumed the roles of townspeople as if they’ve always been there. Though it’s a mystery that perplexes the sheriff, the viewer is made immediately-aware who the killers are. The real unfolding mystery is the why and how...a dark path of unpredictable - yet somehow inevitable - plot revelations, each more shocking than the last.

40 years later, Dead & Buried is still more tacitly unnerving than the typical horror film, and not just because of the grim storyline and gruesome violence. While seldom overtly scary, director Gary Sherman maintains a constant level of dread, from the opening scene through the final act, with a twist ending that would make Rod Serling proud. Sherman’s aided immeasurably by Joe Renzetti’s somber, haunting score, as well as ethereal cinematography by Steven Poster, who practically turns Potter’s Bluff into a secondary character (an antagonist, of course).

Because of this, Dead & Buried holds up better than a lot of its contemporaries and remains just as darkly disturbing today as it was 40 years ago. Even my horror-jaded daughter, who joined me during my review and generally finds most ‘80s horror amusingly archaic, was thoroughly creeped out. Still, she handled it better than I did the first time.

While Dead & Buried’s considerable visual and sonic attributes were already nicely preserved on Blu-ray by Blue Underground back in 2009, this 4K Limited Edition set is definitely worth the upgrade. Both the Blu-ray and 4K discs included here feature great picture and sound, with the 4K being slightly better, especially noticeable during the considerable number of scenes which take place at night. But the real reasons to double-dip are the supplements, the best being a CD of Renzetti’s score. Both discs also include the same big batch of new and archival bonus features. Additionally, the set is available with three different lenticular covers. The one we received for review features the unfortunate fate of poor 'Freddie' (the first victim).

BEHIND THE SCENES OF DEAD & BURIED - Old super-8 movies shot on-location during production; sort-of narrated by Gary Sherman and a few others.

DEAD & BURIED LOCATIONS: NOW & THEN - For the most part, these locations haven’t changed much.

THE PAGES OF POTTER’S BLUFF - Author Chelsea Quinn Yarbro discusses writing the novelization, which was a best-seller.