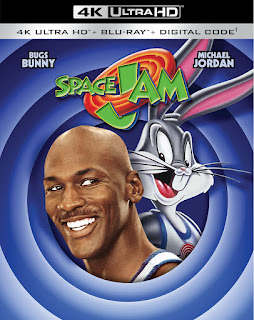 If someone would had told me back in 1996 that Space Jam would someday be a considered a modern classic, I'd assume they drank way too much of Michael's Secret Stuff.

I'm an old school Looney Tunes fan, practically raised on them during my formative years in the early 70s. This was back when the only time to catch cartoons on TV was Saturday morning…Scooby-Doo, Superfriends, Speed Buggy, Groovy Ghoulies, Wacky Races, etc. We’d be up at the crack of dawn, Cheerios in-hand and ready to start our weekend with five hours of animated fun before Dad took back the TV for college football.

The one exception was Looney Tunes. Hong Kong Phooey may have come and gone in the blink of an eye, but these classic shorts continued to usher-in Saturday mornings for nearly 40 years. We never saw anything new…no Looney Tunes babies, no vapid mash-ups, no Sonny & Cher showing up to help solve mysteries. Just good old fashioned cartoon mayhem, with affable characters who never changed…Bugs Bunny was always a wise-ass, Daffy Duck was always angry, Elmer Fudd was always an idiot and Wile E. Coyote always failed to secure a meal.

That unwavering consistency was what made these characters endearing. Then in 1996, the product known as Space Jam (I still hesitate to call it a movie) turned them into the same brand name selling tool that Scooby-Doo became in the '70s.

Still, I must concede I actually sort-of enjoyed Space Jam, mainly because it was the first significant appearance of these beloved characters in decades, even if it was for a cynically-produced exercise in stunt casting. Seeing Bugs play second fiddle to Michael Jordan (himself a brand name) was better than no Bugs at all.

Though we know we’re watching more of a marketing campaign than an actual movie, Space Jam is often amusing, and aside from the idiotic “plot” (Jordan must save the Looney Tunes by challenging nefarious aliens to a basketball game), it seldom insults the viewer’s intelligence. Sure, most of these classic characters’ personalities are far-removed from their golden years. And yeah, giving Bugs a sassy love interest is a stupid idea, while the R&B soundtrack smacks of a ploy to sell CDs. But the film isn't without its charms, with a lot of cameos by sports figures willing to poke a little fun at themselves.

Old school animaniacs might make the argument that throwing the Looney Tunes into something as pandering as Space Jam is no different than the Harlem Globetrotters showing up to save the day in Scooby-Doo. I’d retort that Scooby-Doo began including “guest stars” to boost flagging ratings and the animation was still as crappy as ever. While not nearly as jaw-dropping as Who Framed Roger Rabbit, Space Jam was technically impressive for its time and briefly succeeded in endearing these characters to a new audience. And for old Boomers like yours truly, it had been years since I’d seen these guys in anything new, so I welcomed them back like old friends, even if forced to watch 'em square-off against aliens on a basketball court.

An amiable but forgettable product of the decade from which it sprang, Space Jam pretty much became dated the minute Michael Jordan retired for the second time, to say nothing of the cameos and pop culture references would be totally lost on any kids watching it for the first time today. It's obvious Space Jam was never meant to have a long shelf life.

Yet here we are, 25 years later and Space Jam has somehow endured, still relevant enough to warrant a (very) belated sequel. Heck, even the original website is still up-&-running. It may not have aged too well - especially aesthetically - but remains revered by a generation who not-only grew up with it, they’ve shared this childhood relic with their own kids. In that respect, I suppose the film’s continuing popularity is not-unlike that of such family classics as The Goonies or Willy Wonka & the Chocolate Factory.

To coincide with the release of Space Jam: A New Legacy, the original has been given a 4K UHD facelift. Additionally, a Blu-ray and digital copy are also included. The 4K disc offers a slightly better overall picture - deeper blacks and more accurate color - than the Blu-ray, which was pretty good to begin with. The big difference is in the sound, with a terrific Dolby Atmos track. But again, the audio of the original Blu-ray was nothing to sneeze at, either. An upgrade would probably most-interest hard-core home theater enthusiasts, especially since no new supplemental material is included, which is actually kind-of surprising. Considering Space Jam’s status as a GenZ classic and the impending sequel, one would think a few retrospective bonus features would be prudent.

Still, the fact that it's been given the 4K treatment At all - as well as a simultaneous Best Buy Exclusive Steelbook release - is a testament to the film's longevity. Despite the producers' intentions and my initial assessment of its lasting merits, it looks like Space Jam became a modern classic after all.