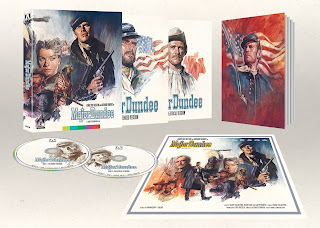 Major Dundee has a troubled history that’s arguably as interesting as the film itself, which is comprehensively documented in this outstanding limited edition boxed set from Arrow Video.

This was the third feature film by mercurial director Sam Peckinpah, whose legendary love/hate relationship with studios, producers, actors, women & booze began to take shape here. Sometimes his creative vision was constrained by outside interference, other times he simply shit in his own nest, and you can see examples of both in the original theatrical cut...the passionate artist vs. the pragmatic studio, with the latter being the ultimate victor. As released in 1965, Major Dundee - with an all-star cast fronted by Chalton Heston and Richard Harris - is entertaining enough, though certainly shows signs of haphazard attempts to trim the running time, not-to-mention a film score and peppy main title song that seem pretty tone-deaf considering the violence and dark themes.

According to some historians featured in this set’s bonus material, Peckinpah thought Dundee could have been one of his masterpieces without all the studio interference, a claim not always shared by certain critics. But with a painstaking 2005 restoration - which includes previously deleted scenes and a sweeping new score by Christopher Caliendo - there seems to be a consensus that, while still no masterpiece, the extended version is a much better film.

This set lets viewers decide for themselves with both cuts of the film. Having seen both, I concur that the extended version - with its gorgeous 4K restoration - is vastly superior. While it still has narrative and pacing issues, particularly during the second half - one can easily see what Peckinpah was trying to achieve with his complex characters and themes, the most prominent of the latter being Dundee’s (Heston) Melvillian obsession with avenging a massacre at the hands of Apaches (also discussed at-length in some of the supplemental features).

However, my main takeaway was its conceptually-striking resemblance to Robert Aldrich’s The Dirty Dozen (Dundee’s recruitment of thugs, outlaws and Confederate prisoners). Additionally, a few commentators suggest that, had Peckinpah gotten his way, Major Dundee would have been a lot more violent. Though mild compared to his next film, The Wild Bunch, it’s still pretty bloody and he apparently wanted to make similar use of slow-motion during the numerous gunfights, which I suppose could arguably render Dundee’s single-minded - and dangerous - willingness to sacrifice dozens for the sake of vengeance - and glory - far more disconcerting (but also more thematically pertinent).

Or maybe not. The point is this set is loaded with new & vintage bonus features which invites the viewer to re-examine the film - and its director - with fresh eyes. Major Dundee still ain’t a masterpiece, but this beautifully packaged set offers a fascinating and thorough exploration of a historically troubled film. One minor quip: It’s too bad Caliendo’s new score isn’t included as either an isolated audio track or - better yet - a supplemental CD, like Arrow recently did with The Stylist. It’s a great piece of music.

3 “PASSION & POETRY” FILMS - Passion & Poetry is a series of short and feature-length films by director Mike Siegel, all dedicated to the life and career of Sam Peckinpah. Three of those films, “The Dundee Odyssey,” “Peckinpah Anecdotes” & “Mike Siegel: About the Passion & Poetry Project” are included. “The Dundee Odyssey” is the only one specifically related to the film. At 75 minutes, it’s also the most interesting.

MOBY DICK ON HORSEBACK - Fascinating critical video essay by David Cairns (though he should speak up a little more).

RIDING FOR A FALL - Vintage featurette

2-SIDED POSTER - Unlike previous Arrow Limited Edition boxes, this poster is landscape rather than portrait. With vintage and new artwork, both sides look really cool, so I’m still not sure which side I’m gonna frame and display in the Dave Cave.

MEE-OW! LIKE BEING TURNED LOOSE IN A BIRD SANCTUARY.
Posted by D.M. Anderson at 8:44 PM