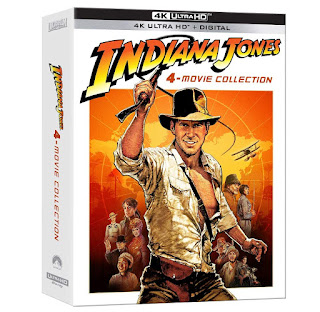 It’s hard to believe Raiders of the Lost Ark is now 40 years old.

I was there for its initial theatrical run, and like Star Wars, the film was practically an out-of-body experience. Even back then, we knew Raiders was a game changer that would redefine what an action movie could be. It also remains one of the few films from the ‘80s that transcends the decade, its popularity and influence still being felt today. Why else would they be attempting a fifth film even though Harrison Ford is pushing 80?

The other sequels have wildly varied in quality and remain subjects of endless debate over their worth within the franchise, often contingent on one’s age when they first saw them. Personally, I think Indiana Jones and the Temple of Doom is not-only the worst of the series, it has aged terribly and remains the most soulless, cynical film Steven Spieberg ever directed. On the other hand, it continues to be revered by an entire generation of ‘80s kids who loved the thrill-ride pace and parade of gross-out gags.

Conversely, I know it’s hip to hate Indiana Jones and the Kingdom of the Crystal Skull for the questionable CGI, implausible action and the unwelcome addition of Shia LaBeouf. But is “Mutt” Williams really a more obnoxious character than Short Round, or do we just hate LaBeouf that much? And are interdimensional aliens truly harder-to-swallow than magical sacred stones? Looking beyond the much-maligned surface aesthetics, Crystal Skull isn’t without its narrative issues, but there’s an admiral attempt to recapture the spirit of the original and bringing back Karen Allen is good for a few warm fuzzies.

Most fans universally agree that Indiana Jones and the Last Crusade is the best of the sequels, which I won’t dispute. With the welcome return of a few supporting characters, the irresistible addition of Sean Connery as Indy’s father and a plot & tone similar to Raiders, it plays almost like an apology for Temple of Doom. And like Raiders, the attention to dialogue & characters make it more than just-another action film.

Of course, all four have been released and re-released on video over the years, either separately or bundled together. Whether one thinks the original is untouchable or Temple of Doom was robbed on Oscar Night, it’s a good bet most Indy fans already have one of those boxed sets in their collection. But this is the first time they’ve been released in 4K Ultra HD, a five-set set with all four films and a supplemental Blu-ray containing most of the bonus features.

Is it worth the upgrade? If you’re seeking the best possible picture quality, the answer is an unqualified yes. Each film features an excellent transfer, with sharper lines and rich, accurate colors. For example, I saw details in Raiders I never really noticed before - the smoke in Marion’s bar, the sweat on people’s faces, the Egyptian hieroglyphics in the background - despite having seen the film dozens of times over the years. The audio has also been remixed in Dolby Atmos to great effect (though my comparatively puny set-up doesn’t do it justice). Additionally, this set features digital copies of all four films and the overall packaging is an improvement over the Blu-ray set’s disc-scratching sleeves (I hate those things).

While the supplemental Blu-ray is chock-full of extensive bonus features, they’re all carried over from previous releases. Nothing new is included, so unless enhanced picture & sound are important, you might as well stick with what you already have. Other than that, this nicely-packaged 4K collection is a great 40th Anniversary gift for Indy fans.

ON THE SET WITH RAIDERS OF THE LOST ARK - Vintage two-part making-of doc, with interviews and location footage.

MAKING THE FILMS - Five making-of features, two for Raiders, one for each of the others. Running times range from 28-58 minutes.

DIGITAL COPIES OF EACH FILM

2-SIDED MINI-POSTER - One side features replicas of all four original one-sheets, the other is a global map of locations, photos and movie quotes.