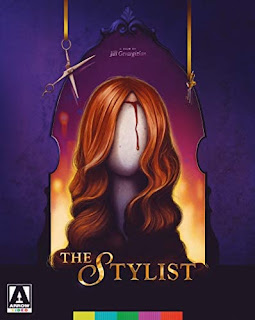 As the film opens, we already sense hairdresser Claire (Najarra Townsend) is lonely. Based on how she interacts with her last customer of the evening - a successful woman in-town on business - she seems envious of the life she attentively listens to. As the conversation continues, we begin to suspect not all is right with Claire. Though nothing she says suggests anything sinister about her, there’s something slightly unnerving about her demeanor.

Suspicions are confirmed when Claire drugs and methodically scalps her. Afterwards, she goes home, retreats to her secure basement in tears and puts the bloody scalp over her own hair. She stares into a mirror and pretends to be the woman she just killed, which seems to make her feel better. Since there are numerous other scalps propped on head stands throughout the room, we realize Claire is not-only psychotic, but a serial killer.

Thus begins The Stylist, not-so-much a traditional horror film as a character study of a diseased mind. While it is certainly horrifying - unflinching in its depiction of Claire’s handiwork - director-co-writer Jill Gevargizian seems to be striving for something beyond gonzo sensationalism. The film’s story and structure recall the 1982 gorefest, Maniac, but the similarities pretty much end there. Claire is a fascinating character...socially awkward, self-loathing and in constant distress when not emulating the women she admires. Hence, the only time she feels happiness, however briefly, is when she dons their scalps.

Yet at the same time, Claire seems kind and empathetic. Even her obsession with bride-to-be Olivia stems from genuine affection, and since she appears sincerely ashamed of her own impulses, there are moments when Claire actually gains our sympathy...at-least until she kills again and we’re reminded that she’s not-only dangerous, none of her victims deserve their fates. It is an interesting dichotomy, which Gevargizian explores with a surprising amount of depth, yet wisely avoids over-explaining what makes Claire tick. She leaves that to Najarra, who strikes the perfect balance of sympathy and menace, often without saying a word.

The Stylist is also...well, stylish. Despite occasionally-shocking violence, the film is moody, atmospheric and deliberately paced. That might be off-putting to those expecting nothing more than a gory good time with the girls. For everybody else, it’s a dark, compelling journey of a woman whose desperation to be somebody else reaches disturbing heights...or depths.

THE INVISIBLE WOMAN - A very interesting - if somewhat academic - video essay by author/critic Alexandra Heller-Nicholas. Includes plenty of footage from The Stylist, as well as a few other recent horror titles featuring women antagonists.

OUTTAKES - Pretty much a blooper reel.

ORIGINAL KICKSTARTER VIDEO - Includes scenes from some of Gevargizian’s other short films.